Boiling down the themes of uber-profitable App Store games yields a single undeniable fact of the universe: animals are lazy. The birds can be as angry as they like, but they don’t seem to do a thing about the pigs on their own. It’s only when you launch them out of slingshots that they take action. The gormless Om Nom would starve to death if it weren’t for you rewarding his horribly sedentary lifestyle with candy by cutting the rope. Let’s face it. You’re all a bunch of enablers.

However, since your co-dependent tendencies aren’t likely to change any time soon, it’s as good a time as any to take a look at yet another creature lacking motivation in Swing the Bat [99¢]. Published by Chillingo and created by Deadbug, the game draws in numerous elements from many recently successful iOS games.

While most bats are unable to survive without the power of flight to help them acquire food, this bat has developed a bit of a unique evolutionary adaptation. Rather than actually learn how to use the anatomy it was born with, he has developed the ability to launch his legs out like a grapple-gun, attach to trees, and swing to get around. It’s a cybernetic augment that would make even Adam Jensen jealous. 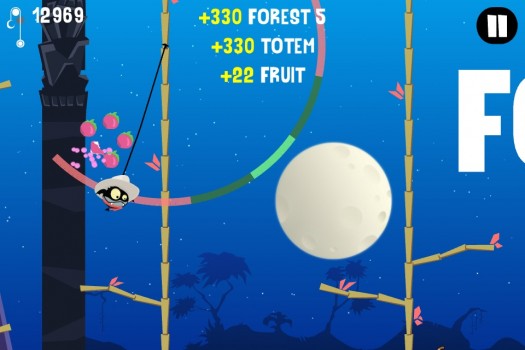 The first cue that Deadbug takes from the winning lazy animal formula is one-touch controls. Tap and hold to launch your leg and attach it to a surface and swing, then release at the optimal point in the arc to launch yourself forward. A handy guide is present to show you where to release for maximum momentum, but once you’ve got the hang of it you can decide to remove the training wheels and gauge your swings on your own.

There are two main modes in Swing the Bat, Dusk ‘til Dawn and Night Fire. Dusk ‘til Dawn is essentially Tiny Wings [99¢] in reverse, where you race to see how far you can get before the sun rises. As you advance, different animals will appear in the bamboo and attempt to stall your progress. Points are rewarded for perfect swings and for gathering food such as fruit and moths. Gather enough food and your bat will be inspired to actually fly for a short time. 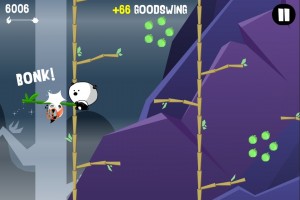 While the main objective of Night Fire is still to get as far as possible, this second mode forces you to get more strategic. A fire at the base of the trees will continue to grow, and popping balloons to release buckets of water on the blaze is the only way to ensure you’ll have the time needed to push forward. It’s less speed and more precision focused than the other.

The second major cue it takes from Tiny Wings (and more recently, Jetpack Joyride [99¢]), is the implementation of an extensive achievement/objective system where completion will unlock new bat costumes. While the objectives never really force you to play the game much differently, as they do in the aforementioned games, they do add some needed spice to a fairly vanilla core. The unlockable costumes along with character design and general art direction all have a fun cartoony feel to them; the game’s got a nice look about it.

My biggest complaint about Swing the Bat is that while it brings in many of the mechanics of a Tiny Wings, it’s missing the same sense of arcade-like fun. The swinging controls are precise and easy to master, but it lacks the sense of speed and fluidity that makes other successful entries in the genre so enjoyable.

Even when you’re hitting every swing perfectly, the plodding pace of the swings means there’s no point where you get enough momentum going to really feel like you’re flying through the levels. The other animals that are there to provide a needed difficulty curve unfortunately also rob you of really ever enjoying a good run of swings.

The flying mechanic also is a bit under-baked. Once you eat enough fruit to temporarily unlock this ability, you should be able to take advantage of it to avoid those pesky pandas (who are strangely less lazy than the bat). However, the game does a poor job of indicating when you’ve activated this mode, so by the time you realized why you aren’t swinging any more you’ve wasted half the time you had to fly.

Deadbug has clearly paid attention to what works in the genre and brought some solid design to bear for Swing the Bat. The game has a warm colorful look, and the objectives and controls give this $.99 title a decent store of longevity and enjoyment. It never quite breaches the level of pure fun and action of the titles it so clearly draws inspiration from, but it lives up to the Chillingo standards we’ve come to expect. It’s worth the buy for those hungering for more one-touch objectives to get lost in and another cute, helpless animal to spoil rotten.