Ever have one of those games that you desperately want to hate but can’t? You know there are better games on your phone and that by all definitions you’re essentially wasting your time by playing it, yet you can’t seem to escape the grind. That’s Pygmies-Hoglet [$.99]. It’s the digital equivalent of a menthol cigarette: it’s in no way what you originally planned to smoke, but the flavor is weird enough to see you through while you get your fix.

I don’t want to come across too harshly, but in good conscience I need to spell out up front that this game may quickly turn off some folks. That disclaimer behind us, this game has an innocent, playful charm I can’t seem to shake and some simple tweaks to classic RPG mechanics that kept me from dwelling on its shortcomings. If you liked the movie Rudy even ironically, you may consider giving this scrappy underdog (underhog?) a try.

Looking at the iTunes description and the art style, you’d be forgiven for thinking that this game was some sort of iOS Tomagotchi app. The main character, an adorable low-fi hedgehog, must regularly be fed and made to sleep in order to survive. But, that’s as far as the comparison goes. 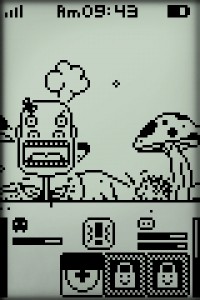 The story is as simple and thin as it is cute. The hedgehog is sad because he has no friends, and so he sets off in search of other spiky things to make friends with. Much like me in junior-high, he is constantly rejected, and so must push on from area to area to put his heart out there again and again. This hedgehog is not daunted, however, and tries to bond with everything from cacti to a super spiky boss enemy who proceeds to attack him.

So, if you haven’t guessed by now, this game is full of all the usual quirks you’d expect from a localized Korean game. If you enjoy the sorts of anachronistic and linguistic oddities that go hand in hand with such titles, as I do, then you’re in for a treat. While some random encounters in this game result in battles, many will find you face to face with some ridiculous characters.

Collected baubles can be traded to Jewelry King, a pimped out monarch with a goatee who apparently is comfortable with setting up his throne in the middle of the wilderness. Excess food can be donated to a homeless man, who will stubbornly reject anything but the finest foods. Oh, yeah: Santa Claus. Whether in the mountains or jungle or desert, jolly ol’ Saint Nick will periodically show up and ask if you have any items for the kids for Christmas.

The art style plays into the quirkiness perfectly, with a Game Boy-esque approach that fits like a glove on top of the old-school RPG simplicity. It was easy to get pulled back in time with Pygmies-Hoglet, and when I finally emerged from the blocky grey and black world, all the colors on my phone suddenly seemed vibrant and new in a way they weren’t before. The game takes the reception bars, battery meter, and time display from your phone and renders them at the top in the same style, which was a really nice touch. 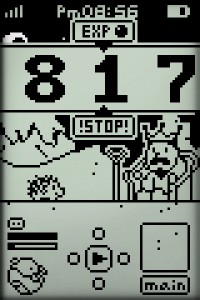 The core gameplay has you moving around on a gridded map, with encounters marked along its surface. Travel to a dot, and an event will ensue. This might be a simple item pick-up resulting in food, baubles, or medals being added to your inventory. This might also be an encounter with one of the aforementioned NPCs, or an enemy may attack. Once you’ve encountered a spiky thing in the world and tried to make friends with it, you’ll be able to travel to the next area.

The RPG elements couldn’t be any simpler. XP earns you points to sink into HP, damage, and dexterity ratings. If I might offer a word of advice to new players, get your dexterity raised early on. This is because dexterity controls how quickly your attacks come and will make the difference between life and respawning in many cases.

The fighting is an active-time battle system, where you and your opponent have meters that fill up. Once the meters fill up, your attack is released. A blocking system is implemented that allows you to reduce the damage you receive and even reflect some of it. However, whenever you are blocking your own attack meter will stop progressing. This forces you to keep an eye on both meters and use your block judiciously, giving the stripped down combat a fun element that keeps you from entirely zoning out.

While the basic mechanics are satisfying, there are a few elements of Pygmies-Hoglet that make advancing the game an occasional exercise in tedium. If this game were a set of teeth, it would have to wear a mouthguard to bed at night; the grinding is excruciating at times. Raising damage and dexterity stats are reasonable, but every time you put enough ability points in to raise your health you are rewarded with a measly single HP increase. Travelling is an additional drain on the experience, as the time it takes to get from dot to dot on the map can be significant. 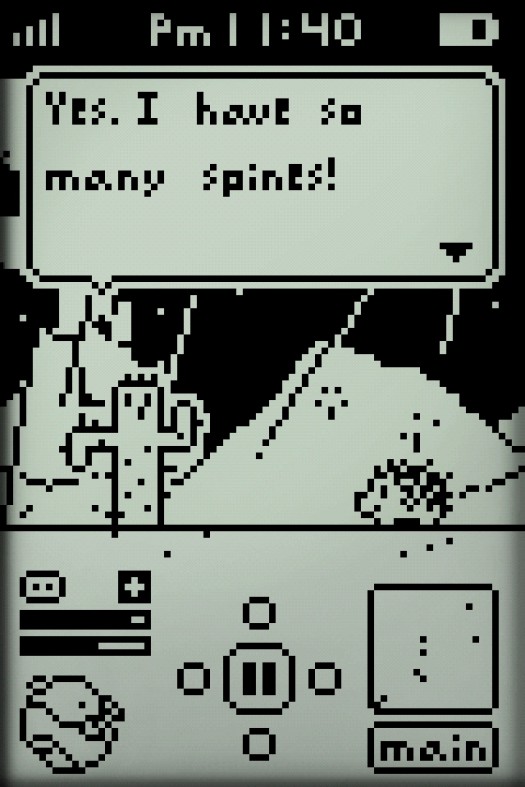 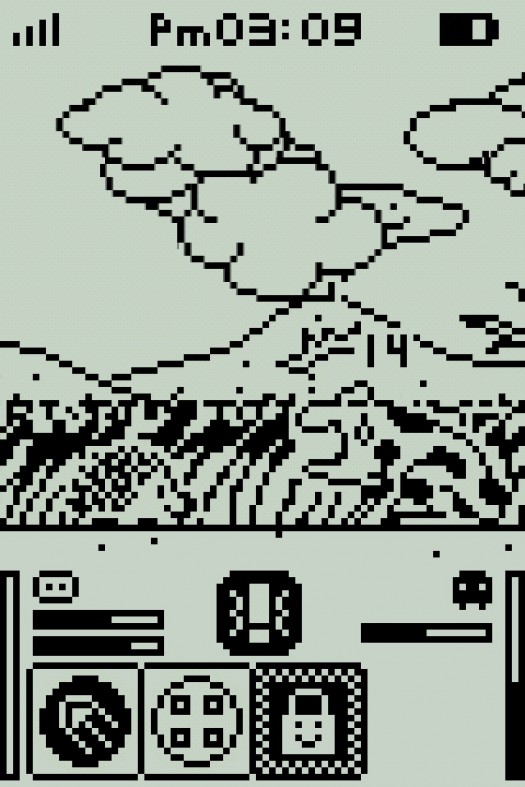 Damage is healed by allowing your hedgehog to sleep, and while it’s initially cute to watch the blocky Zzzz’s waft up from the sprite it quickly becomes frustrating. When you only have a handful of HP to restore you won’t notice, but when you are waiting a minute or more to restore your health later on it can really wear on your patience. Given that combat is the best way to accumulate precious XP, this mechanic really exacerbates the grind.

Despite the periodic time-suck doldrums, I found myself playing the game much longer than I ever expected. Pygmies-Hoglet is that dog that always gets into the food, but you just can’t bring yourself to stay mad at them because they are so full of personality. At $.99, it’s worth giving it a go if you have the patience to milk the cute and fun out of the experience. I certainly wouldn’t blame you if you don’t, however. I’m just weird like that.