What I like about the Hector: Badge of Carnage games is how comparatively different from one another they are. The gap between We Negotiate With Terrorists and its follow-up Senseless Acts of Justice [$4.99 / $6.99] highlights not only the breadth and scope of the adventure genre, but also Straandlooper’s willingness to use episodic content as an avenue for experimentation and iteration.

There are some technical improvements to note — Straandlooper have added helpful on-screen cues to show players precisely where they’re tapping, and Senseless Acts of Justice is significantly longer than its predecessor — but Hector’s cirrhotic core remains largely unchanged: it’s still a competent adventure, smartly written and well-designed. 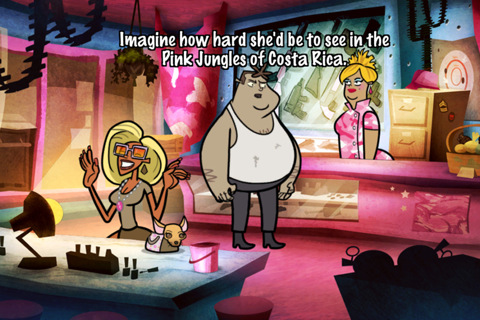 Senseless Acts of Justice doesn’t stray particularly far from established tropes — puzzles are solved by navigating dialogue trees and manipulating items with a cast of quirky townsfolk — but Straandlooper is deft in their adjustments. There are some particularly clever setpieces. There’s a section in Hector is trapped in a building and Lambert must rescue him (after adopting a child) that’s particularly nice. Oh! And the bit with the date-rape drugs!

Straandlooper’s most effective change was structural, though. The first game in the series was fairly strict in its pacing — titular Detective Inspector Hector is given three assignments, born fully-formed from creators Dean Burke and Kevin Beimers’ collective thigh. The game ends when they are completed.

Ep2 loosens its grip, letting players suss out the game’s objectives for themselves. It’s not enough for players to solve a puzzle — figuring out the puzzle itself is often the first step toward progress. 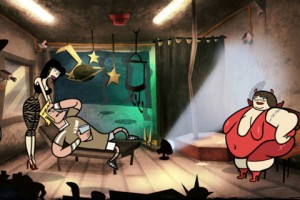 In other words, Hector felt like a (well-voiced and fully animated) flunky in Ep1, but he becomes a cop in Ep2: each step following logically from the next. The first game tasked Hector with simply completing assignments, but Ep2 is about gathering knowledge, using that knowledge to formulate a plan, and then executing that plan by blackmailing people in a brothel.

The puzzles are, on the whole, better and more varied, but it’s really Hector’s up-grade from tchotchke-hoarder to investigator that pulls the game together. In Ep1, Straandlooper lampooned crime shows with pithy-one liners; here, they do it by taking the jumpy, outsized logic of Legally Blonde and creating a set of puzzles and narrative beats to exploit it.

The way Senseless Acts of Justice couples its investigative puzzle-solving with Hector’s job title is an effective, though perhaps genre-specific, tweak, but it stumbles sometimes in execution — there’s a long middle-section that, by and large, consists of navigating dialogue trees just so. These types of “puzzles tend" to be least fun of any adventure game because they get so repetitive and feel so strict. Ep2 also breaks the fourth wall with annoying regularity — it was a cute, knowing wink Ep2, but that humor technique, too, can become repetitive. 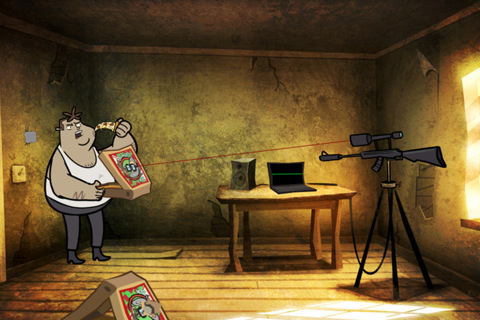 My only serious issue with the game, though: Lambert, Hector’s bumbling partner. The Hector series allows players to ask Lambert for hints and presents it as a viable, in-game option — it is, in other words, not cheating. Unfortunately, Lambert’s dialogue options are often based on information that the player hasn’t learned yet, effectively turning Hector’s hint system into a de facto spoiler machine. This type of cagey gating is annoying in any case, but doubly so in a game that depends on the slow osmosis of knowledge and lateral thinking.

Lambert also reveals — at the end of the game — that he had solved the case hours ago and kept the information to himself. This, I think, was originally conceived as a hilarious joke about both Hector and Lambert’s incompetence, but it just serves to undermine all of the work the player has so skillfully been doing for the last several hours.

Nevertheless, Senseless Acts of Justice is so well-designed and -written so often that I’m willing to forgive. The game stands well enough on its own, but in the context of the Hector: Badge of Carnage series as a whole, it’s a valuable lesson is just how much experimentation the adventure genre can stand while still feeling familiar and grounded. Straandlooper have an eye for characterization and parody, and they were smart to put their faith in the genre veterans at Telltale Games — it’s served them well so far and, I suspect, will continue to do so when Hector: Badge of Carnage wraps up in its third episode.