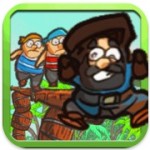 One of my most favorite puzzle games that I played while growing up was Lemmings. Sure, there were plenty of games before that required thinking and coordination, but there was something about being in charge of a group of characters and having to lead them across maps of perilous obstacles that I loved.

BridgeTheGap [$0.99], a pirate-themed puzzle game, attempts to recreate a portion of the classic Lemmings formula while infusing it with even more strategy and precision than its spiritual predecessor. While BridgeTheGap certainly brings some good ideas to the mix through its bridge building mechanics, atrocious controls and poor execution prevent it from being little more than a subpar puzzler.

Your mission in BridgeTheGap is simple: a group of pirates need to get from one end of the level to the other. In your way are a variety of gaping chasms that require bridges to be built over them. The only tools you have at your disposal to build said bridges are barrels, which act as your weights, and bamboo rods, which allow your pirate buddies to cross those gaps. In addition, littered throughout each level are gold coins which can be collected by your pirate crew and typically require more complicated bridges in order to reach them. As you get towards later levels, you will also encounter ‘natives’ which will attack your pirate companions unless you take them out first with your pistols. 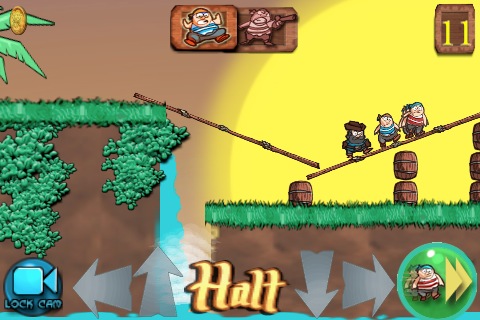 BridgeTheGap can be separated into two different phases. In the building phase, you have twenty building supplies (either rods or barrels) to work with. Once you feel you have a legitimate path to the end goal, you activate the movement phase which has your pirates start moving forward indiscriminately (a la Lemmings). The only commands you can give them are to jump or shoot their pistol. Otherwise, they’re going to keep moving forward. I would have really preferred the option to continue building during the movement phase, as it would allow players to make on the fly adjustments and possibly bring more excitement to the overall game.

Initially, levels are extremely easy to get through. However, they quickly become harder and more complicated, especially if you’re trying to get to the gold coins. Considering that those gold coins are necessary in order to unlock future levels, you quickly learn that they’re less of an optional quest and more of something you have to take into consideration if you want to be able to play through the whole game.

Overall, BridgeTheGap manages to create a decent bridge building game. The later levels require some pretty complicated designs in order to collect all the coins. Thankfully, there’s an adequate tutorial, along with some instructional screens showing some recommended bridge designs (although I hate the fact that you can’t access these designs in-game). There’s definitely a feeling of accomplishment once you manage to get all your pirates safely across all obstacles in a level.

Unfortunately, what little enjoyment BridgeTheGap provides is outweighed by a multitude of design blunders throughout the game. First off is the use of a virtual gamepad for moving about the level during the build phase. I would have much rather have seen a two-finger scroll or some other multi-touch gesture, as the virtual pad definitely gets in the way when you’re trying to do some precise bridge placement. Relatedly, the button placements during the build phase just seem to get in the way of the action. I can’t count how many times I was trying to place a bridge and then I accidentally hit the ‘Ready’ button in the bottom corner. Since there’s no confirmation dialog, my pirates would just start moving and I’d have no choice but to reset the entire level and try again, which becomes increasingly annoying due to load times that really shouldn’t exist in a game like this.

There are also a few other annoying minor issues, such as the main menu being a blob of selection choices without much organization and the fact that the game won’t even automatically reset once all your pirates are physically unable to reach the finish line.

These design issues are really a shame, considering how much potential the underlying game actually has. Unfortunately, in its current state, I can’t recommend BridgeTheGap for anyone other than the most diehard of puzzle fans that are willing to look past all the problems. For everyone else, it’s best you steer clear.