Maybe it’s just me, but every time I see a new game with the word ‘destruction’ in the title, I have visions of toppling buildings and whole cities a la Blast Corp. I suppose there’s just something about that inherently destructive chaos that appeals to me.

As is the case with most puzzle games, Demolition Master 3D offers set levels that must be completed before moving forward. Each puzzle has various types of wooden, stone and metal structures along with different types of explosives for your use. The goal of each level is to earn stars by toppling structures, blasting pieces of debris into green and yellow-tinted items littered across the playing field, all while preventing the same debris from hitting red-colored objects. 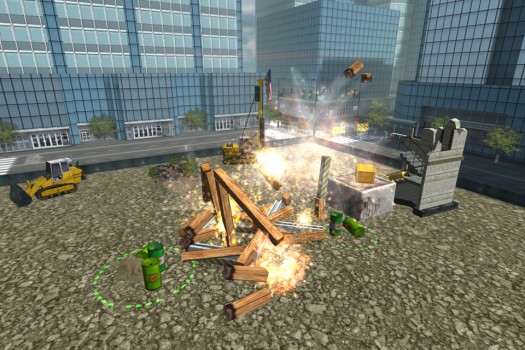 Typically, a 3D puzzle game is only as good as its physics engine, and Demolition Master 3D does a good job of implementing an intuitive and predictable system that makes it a blast to play. Even as each level gets progressively harder and requires more thought and precision in placing your dynamite, I never thought that I was in a position where I could never figure out the solution.

In addition, due to the nature of the 3D physics, there are multiple solutions to each problem, which I think is always a good way to make a puzzle game less frustrating. Thankfully, Demolition Master 3D anticipates the fact that a lot of levels will be solved based on trial-and-error and allows you to instantly go back to your last explosive set-up should you fail to achieve all the objectives. This lets you go back and adjust your previous dynamite positions with little effort. It’s a small feature, but one I think is overlooked in a lot of similar puzzle games. 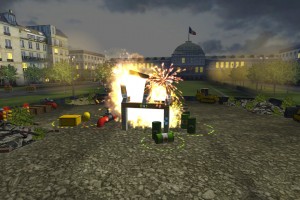 As far as content is concerned, Demolition Master 3D has over 60 levels that span three different locations. The locations simply serve as different backdrops and don’t particularly affect the gameplay, although the change in scenery is always nice. You’ll find that it’s relatively easy to breeze through the first 20 or so level, although you’ll most likely start spending more time per level as you get further in and they get more complex. I would have liked to see more content for long term viability and it seems that AppMania will eventually be releasing another level pack.

Whenever a game requires a good deal of precision and strategy, its controls become even more important. Unfortunately, this is where Demolition Master 3D falters somewhat. The control scheme just seems a bit unintuitive at first glance. It takes too many taps in order to actually place a bomb on a structure, and the controls just don’t seem smooth enough if you need to reposition an already placed explosive.

The most annoying issue I had was having the game not register my taps when I was trying to select specific structures in order to drag around specific bombs attached to that structure. Fortunately, Demolition Master 3D does offer a decent tutorial at the onset, and the controls become easier to use the longer you play. However, it may detract some players just starting out, which would be a shame.

Control issues aside, Demolition Master 3D is a solid puzzle game that gets a lot right. There’s enough content to keep you busy, and the three-star rating system, coupled with high score competitions via Open Feint and Game Center ensures that you have the motivation to continually return to each level in the hope of increasing your score. There’s nothing particularly eye-catching or unique about this game, but that doesn’t necessarily mean that it can’t offer an enjoyable experience.

With that said, if you’re a fan of puzzle games in the third dimension and willing to endure a small learning curve, Demolition Master 3D may be worth a try.