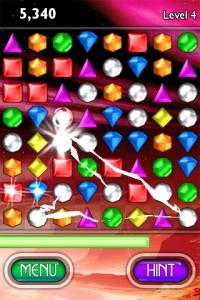 Hardly even needing an introduction, PopCap’s Bejeweled 2 [Free] is the grandaddy of all the match-3 puzzle games that have ever graced the App Store. The Bejeweled franchise itself is more than 10 years old, and it’s hard to come across somebody who HASN’T played a version of this game at some point. Many titles have innovated on the match-3 formula since Bejeweled 2’s release shortly following the opening of the App Store, but somehow it still remains one of the most compelling and fun entries in the genre.

Now, for reasons unknown, PopCap has dropped the price of the iOS version of Bejeweled 2 to free. This marks the first time the game has ever been free on the App Store, and as part of the first run of iOS games back in mid-2008 Bejeweled 2 used to be a $9.99 title. It’s been living the 99¢ dream for about the past year though, but the fact that it’s now free is still pretty significant. If don’t yet have Bejeweled 2 on your iOS device, now would be a great time to snatch it up, because I really don’t know how long it will remain free.