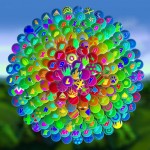 Late last month, a game we’re pretty fond of called Disc Drivin’ [$1.99/Free/HD] received a meaty new update with 3 brand new tracks and a new obstacle. Now just a few short weeks later and the folks over at Pixelocity Software have gone and released yet another update to Disc Drivin’ and this time have added a couple of great features that people have been asking about for a long time.

First off, you can now check how many of each medal you’ve earned over the total amount of games you’ve played. There’s always been a running list of your 10 most recent games where you can see where you placed as well as replay everybody’s final turn, if you wish, to see how it all went down. That feature is nice, but I’ve always wondered how I’ve done overall, and now I can check on this anytime in the Settings menu.

Also worth mentioning is the new ability to swap the power-up buttons on the bottom of the screen. As most players know, sometimes it can be pretty awkward trying to activate a power-up immediately after taking your turn because the button was always on the right hand side of the screen, and in my case this was directly under my flicking hand. Having the ability to put that button on the left side of the screen is pretty nice.

However, the huge new feature added in this update to Disc Drivin’ is the often requested ability to customize your disc. There are tons of different disc designs to pick from, broken down into packs of 4 or more discs each. Each pack can be unlocked for a 99¢ in-app purchase, and you can further customize the discs by choosing their 2 colors. Of course, you’re also welcome to change up the colors on the original “flame" design disc for free. 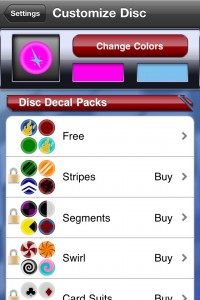 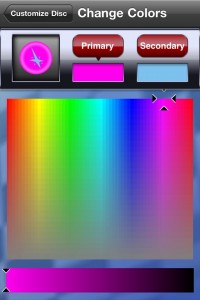 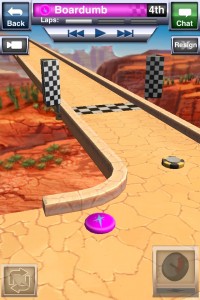 The disc and color customizing interface is simple to use, and I was really surprised to see how much having a custom disc added to the game’s enjoyment. I mean seriously, aren’t you just totally jealous of my pink and blue disc that looks fit for a 4-year old girl? Thought so. I’ve nicknamed it “Jared’s Magical Ponydisc Adventure", FYI.

If you’re a Disc Drivin’ fanatic like myself and others, then be sure you’ve grabbed this latest update and have pimped out your ride. If you haven’t given the game a spin yet, there really should be nothing stopping you from trying out the fully-featured ad-supported free version.