A game is typically defined as a success if it manages to nail at least one core gameplay element perfectly. Despite this, too many games fall into the trap of trying to focus on too many different things at the same time, with the result being that they either fail horribly overall or they end up in the dreaded category of ‘Jack of all trades, master of none.’

Rogue Sky [$0.99 / HD] succeeds where these lesser games have failed. While primarily a sky-platformer focused on exploration and collection, Rogue Sky also incorporates a well done combat system, and ties everything together a variety of objective-based missions and a perfectly curved difficulty that adjusts to the type of gamer you are. Combine these gameplay elements with beautiful graphics and a grand score, and Rogue Sky becomes a must-play for nearly everyone. 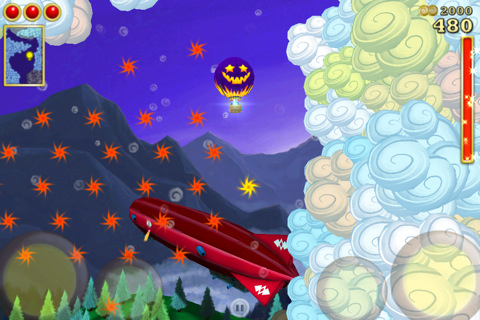 Rogue Sky has you playing the role of a (rogue) hot air balloon pilot that gets attacked by your enemies at the beginning of the game. Unfortunately, the attacks damage your balloon and you are forced to escape in order to recoup and repair. You ‘repair’ your balloon by playing through each level and collecting gold coins, which help you unlock future upgrades and balloon varieties. How many gold coins you earn is dependent on how high your score is at the end of each level. During your trek, you’ll encounter enemy balloons (which shoot back at you), heat-seeking mines, thunderclouds (which must be avoided while navigating the level) and more. Overall, I’d say that Rogue Sky does an excellent job with variety, and no level really seems the same.

Rogue Sky’s controls are actually pretty simple. There are two thruster buttons on the screen, with each one turning the balloon in its respective direction. Hold both down, and the balloon goes up, while keeping both buttons depressed causes the balloon to steadily lose altitude. Double tapping either thruster button also launches a cannonball in that direction. Two other weapon buttons, a drop charge (mine) and a disrupt charge (super move) finish out the controls. Since you are piloting a hot air balloon, there is a certain amount of variance when moving around with the thrusters. If you’ve ever played the classic game, Balloon Fight, you’ll have a decent grasp on the movement controls. Thankfully, the controls do become almost second nature with a few minutes of practice, which is necessary considering how challenging this game can be. 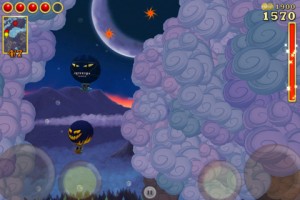 As far as difficulty is concerned, Rogue Sky has an interesting interpretation of it. If all you want to do is just pass each level and get to the end of the game, Rogue Sky does a decent job of letting you do that. However, if you’re a perfectionist and must earn every gold coin on each level, then you’re going to have to do a lot extra work. Each level in Rogue Sky has a variety of different paths, with some paths being much, much more difficult to navigate and fight through than others. If you’re just trying to scrape by, most levels will let you take the easy route and call it a day. However, the coin collectors are going to have to go down every single path in order to earn the highest scores.

It’s important to note that Rogue Sky’s difficulty is not artificial – every single level can be passed with enough patience and coordination. It’s whether or not you have that patience and coordination that becomes the biggest question. Also, missions do get more difficult the further you play as new elements are introduced to challenge you (my favorite is a giant airship in the ‘background’ that fires at you). Occasionally I did encounter a few areas where the room for error was extremely slim and bordered on frustration. However, most of those areas were in optional areas and did not significantly impact the progression. Regardless, Rogue Sky’s take on difficulty and collection quests definitely adds to the overall replayability, especially when you take into account the additional balloons with different stats that unlock when you reach a certain amount of gold coins.

Supplementing Rogue Sky’s gameplay are incredible graphics and a well done fantastical soundtrack. The visuals are a cross between cartoonish cell-shaded graphics combined with a 2.5D effect in the background. The whole aesthetic just looks great on the iPhone 4’s retina display and the smooth framerate doesn’t hurt, either.  The soundtrack is very majestic and just sounds entirely appropriate for your role as a rogue balloon pirate taking to the skies against your enemies. You’ll definitely want to play with some headphones in order to really take in the music.

Every element in Rogue Sky just seems to fit perfectly together. The mission-based gameplay and levels work well with the controls and are enhanced by the visuals and music. If this type of harmonious platformer peaks your interest, I highly suggest you check out Rogue Sky. Actually, I’d recommend Rogue Sky to nearly any gamer, as it certainly has something for everyone. Just come in ready for a challenge.