Cedar Hills Games’ Emissary of War [Free] has a lot to live up to. As we’ve already covered in our preview and our interview with CEO and former BioWare employee Tobyn Manthorpe, the game has a pedigree that’s going to be hard to live up.

The core of Emissary of War lies in a simplified isometric hack-and-slash. Control is handled by tapping the screen where you want to go and your character, Ghent, moves there. Simple enough, right? But iOS games never seem to get this modest system right, no matter how hard they try. Thankfully, EoW nails it and it feels natural — no pathfinding issues to speak of and Ghent moves exactly where you tell him. 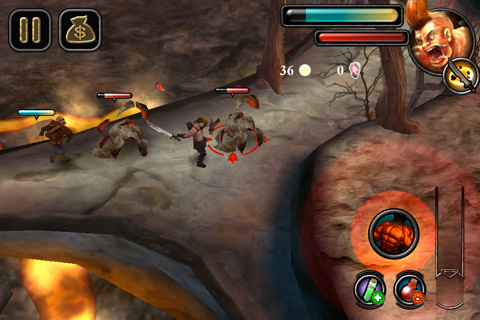 Considering where it comes from, the story in Emissary of War is probably what most people are interested in. To that end, there is a reasonable chance you’re going to feel a little cheated. Not because it isn’t good, but because it’s short, as is the game as a whole, but if you walk in expecting a short story that operates more as a prologue, you’ll find less to be disappointed in. It’s short enough, in fact, there is a Game Center achievement for beating it in under forty minutes.

The game kicks off with the two main characters, the protagonist, a barbarian named Ghent and his assistant, Hassock. The two are wondering around making allies for an upcoming war. Your primary control is of Ghent, with Hassock coming in as potion and spell relief. You queue up his actions as you need them and while it simplifies things a bit, it works well, although you’ll be spamming the potion button more often than anything else. 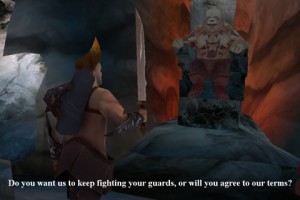 You’ll spend your time making your way through a variety of environments to talk with different factions about teaming up in the upcoming war. There aren’t any dialogue trees or anything, this is a strictly linear experience, but the lighthearted nature of your hero and his partner makes things feel different than most of these games. Along your journey you’ll be picking up coins and runes that can be used to upgrade your characters, but most of the upgrades are fairly shallow, you upgrade health, power and a few different weapons and that’s all.

In that way, Emissary of War has a lot in common with Pocket RPG. It’s stripped down for mobile play and operates in small, bite-sized bits. The levels fork off occasionally to reveal extra runes, but you’ll never stray too far in the wrong direction. You can play the first chapter in around twenty minutes, then unlock the second with an in-app purchase of $2.99 to play the second chapter, which is about the same length. It’s content with offering up a snapshot of a world and teasing you with the idea of more.

So, the game is short, that has been established, but it is solid. The visuals compliment the action well and the control scheme is the best I’ve seen in a touch-and-slasher. There is full voice acting for every character as well, but it’s on par with a ’70s B-movie in quality. I can’t help but think the game would have benefited more from gaining an extra chapter or two and cutting the voice work. It’s nice in theory, but it’s really not necessary in a mobile game.

Emissary of War’s biggest triumph is its style and its lighthearted nature. Sure, Ghent looks and talks a little silly, but he’s supposed to. Where there are plenty of garden-variety hack-and-slash games in the App Store right now, EoW has a soul behind it so you connect and sympathize with the characters, it’s just too bad there isn’t more of it.

The story doesn’t end with chapter two, so it will be interesting to see what Cedar Hills Games does with it moving forward because at the moment, it feels more like a proof-of-concept than a full-blown game. The serialized story idea is tough to wrap your head around in a RPG and figuring out a way to balance gameplay with variety and story is going to be a serious challenge moving forward. If they can pull it off, Emissary of War could be something truly special.