Another day, another endless progress game. Appicus‘s Cave Mice [$1.99] is a charmer, though, with a striking visual style and a few tricks up its proverbial sleeve.

In Cave Mice, you control Theseus Tilsit, a brave mouse tasked with recovering the cheese collection of his family of mice. Since the cheese has fallen into deep caverns below their home, Theseus must travel ever-downwards on a rickety platform connected to a thin string. The slightest bump sends his little gondola flying to pieces, so you need to carefully tilt your device to avoid the obstacles.

As he travels downwards, the obstacles become increasingly aggressive. Aside from the usual denizens of the spaces under homes — spiders, bats, hypnotic toads wearing military hats — strange things are out to get him. There is evidence of a feline conspiracy, but where did they get the dirigibles? Things get mysterious under the ground.

To defend himself, Theseus has options. He can tilt out of the way, but if he bumps into a platform or hits a wall too hard, he’s toast. He can also toss cheese at the enemies that come for him, and he can access cheese bombs. He collects the cheese as he drops, and you can swipe to throw pieces of it as a weapon. But when you inevitably crash poor Theseus into something you are scored by how far you traveled and how many pieces of cheese are in your possession, so be aware that you’re firing from your eventual score. 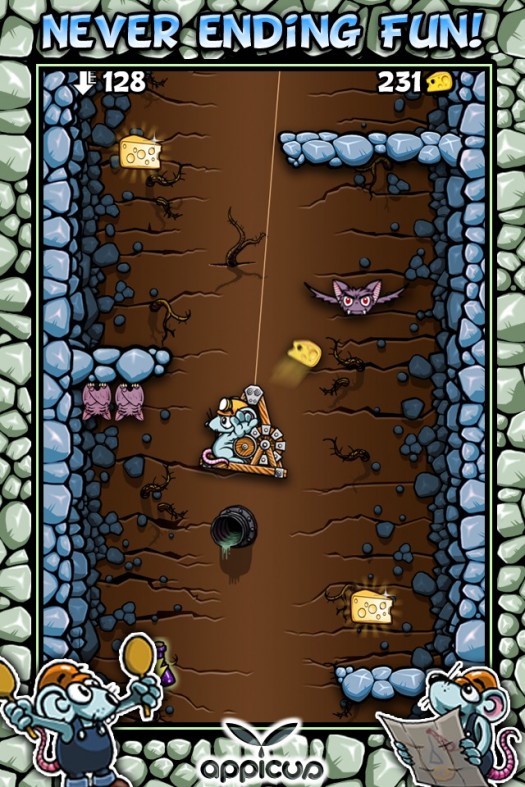 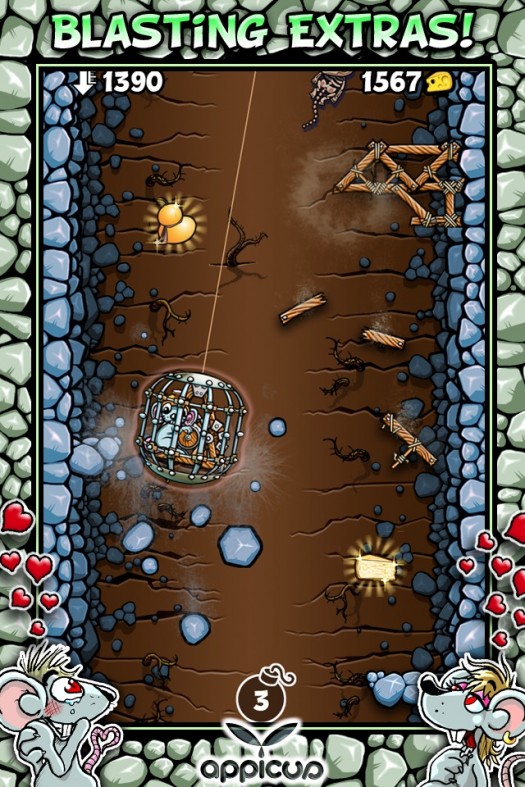 Where Cave Mice diverges slightly from the typical endless formula is in its challenge system. When you reach a depth of 200, and every few hundred after that, the game throws a challenge at you. Fireballs might drop from the sky, spiders may show up every few seconds, and so on. Surviving that section nets you progress toward one of the challenges, which are also the game’s Game Center achievements. Like the cave layout, the challenges are random, so you can expect a different experience each time you play. The challenges allow you to make progress in the game even if you don’t beat your high score.

There are a few ways I’d like to see the game tweaked before I could wholeheartedly recommend it. In some ways the game is too hard — the gondala will collapse if you so much as brush past a platform, and when there’s also a volcano on it spitting out fireballs, you’re going to have a hard time finding a safe place to pass through. And yet Cave Mice is somehow too slow as well, especially for those first 200 meters. The powerups are few and far between — finding crazy powerups is a huge part of the fun of most endless games, and they could add some much-needed variety here.

Cave Mice does most other things very well. I adore the art — even the menu is great, and Theseus’s animations as he peers around the cave are charming. And the physics of the gondola feel quite natural, swinging as you tilt just as you’d expect – until, of course, you brush against a platform and it goes flying off like a bomb exploded. This is a great foundation for a game that could be fantastic with a few small tweaks. I’m also curious to see if Appicus has anything else planned for these mice, given the obvious care that went into designing characters that only appear in the background of this game.

If you also find yourself charmed by the little guys, give Cave Mice a try, and be sure to stop by our discussion thread and post your impressions.