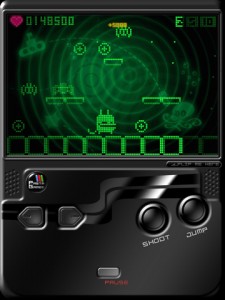 Alright, so while two semi-obscure iPad-specific versions of existing iPhone games dropping to 99¢ might not normally be something we’d cover here, this gives me the perfect opportunity to make my demands to Bulkypix public. Win/win, right? First things first, Pix’n Love Rush DX [99¢ and Snake Galaxy HD [99¢] both dropped to a buck. Snake Galaxy is a fun take on the classic Snake formula, although if it’s too modern for your tastes, there’s always Snake 97.

Pix’n Love Rush DX is the real star of this sale. We seriously gushed over the game in our review for the iPhone version, and the game has since turned into one of the staples on my phone (and iPad) right up there with the classics like Canabalt [$2.99] and Angry Birds [99¢]. The review I just linked goes into the nitty-gritty of how it all works, but in a nutshell Pix’n Love Rush is a action-centric platformer kind of game that is absolutely dripping with retro stylings. In fact, as you play the game and score higher combos the graphics evolve through the history of retro consoles. Check out some of the iPhone gameplay:

The iPad DX version kicks things up another notch by adding a variety of skins to the controls, which are similarly reminiscent of retro consoles. The issue with all this is, as great of a game as Pix’n Love Rush and DX is, you eventually seem to reach a point in both versions of the game where things are just happening too quickly to be able to effectively use the virtual controls. When I die in the game, I rarely feel like I actively made a mistake, and instead it just seems that in a frantic attempt to collect pluses, kill bats, and avoid minuses my thumbs just barely drifted off the virtual controls. This is particularly pronounced in the larger Pix’n Love Rush DX.

…Which brings me to my entirely demanding list of demands. iCade Support. Now that we’ve got more iCade units distributed across the TouchArcade family, it’s becoming more and more clear just how much more iCade support can add to a game like Pix’n Love Rush DX. If this game had iCade support, I’d never leave the house.