Windows Phone 7 has a serious amount of catching up to do both in market share and with apps if it wants to seriously compete with the iPhone and the App Store, but we’ve always seen the handheld as a promising contender. Part of that reason has to do with its Games Hub, which is essentially a mobile take on Xbox Live. It’s packed with promise, and Microsoft has continued to take the steps in the right direction. Today’s news is a good example of that: the next release of Windows Phone 7, Mango, will allow in-app purchases and add-on content. This is huge, as we all know free-to-play is a meaningful mobile model.

There’s more, of course. In the Fall-bound update, Microsoft will introduce badges that you can put on your avatar after earning certain achievements. Also, it’s bulking up its network support, cleaning up the UI in a significant way by introducing sensible views and blades, and it’s integrating a lot of Xbox Live “Extras” into the actual Hub. If you really want to dive into the nitty-gritty, this blog post and this earlier blog post on the Windows Phone Blog both break it all down pretty well, canned as it is. 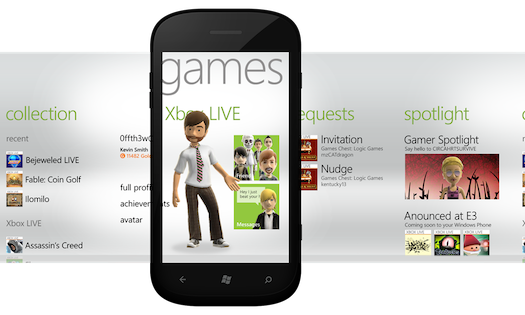 In addition to the former stuff, Microsoft has also announced a bunch of new games slated to hit the platform within the next few months. Most of them are unknown to us, but if you have a 360 or a Kinect, these two brands might ring a bell: Toy Soldiers and Kinectimals. Yeah, mobile versions of these titles are coming. Can you hear me shrugging? I’m shrugging.

It strikes me as weird that we’re still in a wait and watch stance on Windows Phone 7 a year or so out of release, but the platform still doesn’t feel as robust as Microsoft wants it to be. Updates like this, though, are definitely a sign of solid progress.