From the Wii, to the DS, to Kinect, to iOS, developers continue to leverage non-traditional input methods to create gesture based gameplay. So far, their efforts have been met with varying success. For every pile of flailing shovelware or visionary title in the genre that just didn’t pass muster, there’s an Okami or Max and the Magic Marker out there to restore balance to the Force. The concept works.

Art Penguin [.99] takes the concept of drawing objects on the screen that then materialize in the game, and merges it with the tried-and-true auto-runner gameplay that iOS gamers are only too familiar with. A surprisingly smooth experience, the game offers the tension of twitch gesture input and a surprising amount of depth. As is wont to happen in game design, the title’s strengths also are the source of its greatest shortcomings. That being said, there are more than enough reasons to give this game a spin. 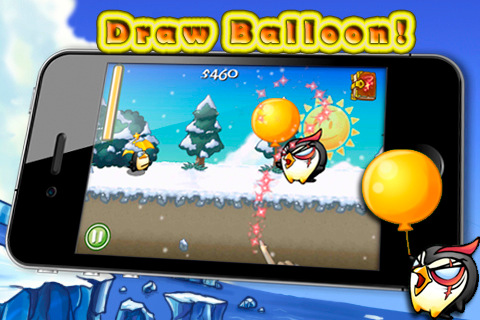 In Art Penguin, the goal is to complete levels by drawing objects that help the aforementioned penguin (who sports an adorable pompadour) to circumvent or destroy obstacles. While you can influence the rate of speed by tilting in one direction or another, the penguin is continually moving forward. As such, the two challenges of the game are to first select the right items to draw and then to execute the gestures before the poor little guy waddles headlong into the Grim Reaper’s arms.

The drawing controls are responsive and precise, which is important when looking at the variety of gesture the game features. You can draw 16 different objects, from items as simple as planks and ramps to more complex gestures that summon springboards, plants, and rainstorms. Each object is useful for navigating specific environmental hazards or for removing gang-banger enemy penguins and other baddies from the screen. Having such a variety of tools at your disposal makes the game challenging and fresh throughout. 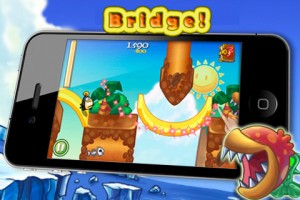 The problem here comes in the form of the auto-running mechanic. Even when tilting to slow the penguin to its minimum speed, the game provides very little time to see obstacles, assess the proper object, and then input the gesture in time. While this is not a major issue in the first few levels, as the difficulty ramps you’ll be rapidly pushed into trial and error territory where you must know what is coming in order to survive rather than simply reacting to what the game is showing you.

This is truly a shame, because the exploration, experimentation and twitchy fun of the early game devolves over time into having to memorize entire levels in order to succeed. Games like Max and the Magic Marker circumvent this issue by pausing the gameplay while you draw, but Art Penguin can’t afford that luxury without sacrificing the auto-running mechanic that provides the game its sole challenge.

The art and production values here are surprisingly sharp; this is one pretty prinny. The characters and environments are colorful and expressive, and the music will consistently push your happy sunshine buttons. The user interface is intuitive and minimal, leaving the needed real estate open on the screen for gesture input. A handy guidebook icon is always on the screen for when you need to pull up a list of available gestures.

Art Penguin weighs in as a strong effort in a genre that is often poorly executed. It’s certainly worth the $.99 download, and if the memorization factor doesn’t rub you the wrong way (it wasn’t an issue for some in the forums) you can drop an additional $.99 on IAP to unlock all the levels from the get-go. I certainly had my issues with the game, but the technical execution, precise controls, cohesive and fun production elements, depth, and variety of gestures make this one impossible for me not to recommend.