11 Bit Studios decision to make a tower defense game set in a bombed-out, alien-infested world otherwise full of sand, bullets, and bombs doesn’t seem like an inspired design direction for a downloadable game from a new studio, but it totally is. Despite its over-saturated genre and its dull name, Anomaly: Warzone Earth [$1.99 / HD] has something new to share and its fresh conceits are executed in some of the most graceful, simple, and visually striking ways I’ve seen in a long time. It nails its strategy component by providing unique constructs, it nails its controls, and it nails its look, which is really is a treat on touch devices.

The easiest way to express what Anomaly does is with the phrase “tower defense in reverse,” which sorta sounds cheesy, but it’s pretty good approximation. Basically, you control the creeps in an environment laced with enemy turrets. Anomaly takes this idea a step further by giving you control over what kind of creeps you can build, the order in which you place your creeps,  and by also allowing you to plot out the course you’ll take dynamically during the mission.

Outside of this next-level take on tower defense, what’s really magical about this game is that the mixture of troops you deploy in the field — whether it be a combination of tank, APAC, missile launcher-thing, shield generator, or whatever else — changes the way you’ll approach each given mission, altering the paths you take in subtle, but important ways. If there was ever a game primed for replays, this is it. It’s insane flexible.

You alter your direction, for the most part, because of the way the turrets are designed. Some, for example, only spit high-damage ‘bullets’ in one direction, while others blast electricity or throw out pulses that disrupt your approach. In other situations, it’s the environment you’ll need to plot around. All these obstructions ensures that your creep build is fluid, which makes for a very satisfying strategic experience. My lizard brain is still a little unnerved by how deep such a tremendously simple-looking game like this can be.

There’s a lot that goes into creep formations. Early on, you’ll get the ability to trade in-game cash for armor and weapon improvements on a per level basis. Later, you’ll receive the ability to buy other vehicles that flesh out a range of attack options. There’s even one that can churn out one of Anomaly’s other remarkable — and ultimately satisfying — mechanics: power-ups. As you kill turrets, you’ll be able to retrieve powers that can mask your troops, heal them, or re-direct enemy fire. Eventually, you’ll get access to a bomb that’ll eliminate foes en masse according to your drop location. The implications of how you deploy  power-ups in a given situation has a huge impact on how you play, build, and move, too. 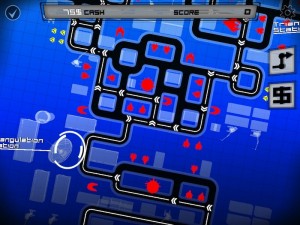 The decision to render the game in a top-down perspective was an apt one, considering this is almost a god game of sorts. You direct all the movement, the moment-to-moment action, and drop power-ups onto the field with direct touches into the game world. The touch in general is precise, fluid, and native-feeling, which is awesome, but also doubly-awesome considering that this is a port of a mouse and keyboard game.

One of my few issues with Anomaly loosely ties into the activation of power-ups. If you’re not on the ball, it’s very possible that you could accidentally drop one while scrolling through a level. And, hey, while we’re on the subject of bad — the writing and setup are both dreadful.

None of the writing really matters, though, as it’s really just a crutch for the premise of the next level, most of which bring a new design element to the table. One of my favorites is the one that has you killing specific power plants with live wiring scattered throughout the level. This premise revolves around identifying which plants to destroy first, while avoiding the lines you can’t get to just yet.  In other levels, you’ll also find yourself doing the normal video game stuff like escorting, protecting, and stopping enemies from damaging specific goals. Outside of the campaign, there’s a tack-on mode Horde-ish mode that adds wave-based play into the mix. It’s okay, but not anywhere near as entertaining as the core experience.

It’s ridiculous how much Anomaly has to offer and how natural it feels on touch devices. I don’t think it’s out of line to call it one of the best games on the market at the moment, as its easily one the visually sharpest, most well-produced, and executed out there. If you want a tower defense game that does things differently, or if you just want a solid strategy title that gives you near complete control over the experience, this is it.