Texas Hold’em is one of those games that’s better in person. It just isn’t the same if you can’t pull out your best poker face. But as we mentioned in our preview, you can now get that experience from the comfort of your couch if you’ve got an iPad 2, because Full Deck Hold’Em [$2.99] includes video chat integration in its multiplayer gameplay, and it works beautifully.

For those who aren’t on the latest, greatest hardware, it also has nearly everything else you could ask for in a Hold’em app: sixteen AI players to compete against, up to four-player multiplayer through Game Center, eight tables with a range of buy-ins and a lot more. There are some rough spots in the interface, but the core experience is great. 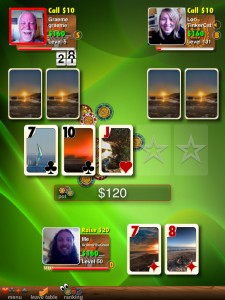 The video functionality is awesome. I haven’t played a game that makes this kind of use of the iPad 2’s front-facing camera before, and I’m impressed with how well it works. The video quality is limited by the hardware, of course, but it’s more than sufficient for keeping an eye on your opponents and chatting freely. Since this review was written before release we only had the chance to test it with two players, which worked without a hitch, but the game supports it for up to four players, which sounds super cool. The experience is like playing face to face with friends, and it makes things so much more fun. On the other hand, if being on camera sounds like the worst thing ever, the game offers granular control for who you want to see and who’s allowed to see you — if anyone.

If you’d prefer to go solo, you’ll be happy to know that there’s a great mix of AI opponents in the game. According to GRL Games, each of the opponents has a unique personality, and they also model their behavior from your play style to improve over time. It’s a bit hard to actually see the nuances of that at work, but I can say from experience that the different AI players feel distinct from each other, and they’re all fairly convincing. They won’t play stupidly, but some play more aggressively than others, and some like to bluff when they can. Most of them are quite cautious, though, and tend to fold on a dime. Still, while it can’t replace the intensity of playing with other people, the AI certainly puts up a good fight.

For players who find the game a bit too challenging, there are plenty of opportunities to keep from busting out. The game will bail you out if you run too low, and each day you can take a spin on the slot machine for a chance at bonus winnings to keep the cash flowing. If you need a big influx of cash because you want to hit one of the higher-end tables, you can also buy chips with real money. If you’re good for cash but need a little assistance in taking down the AI, Full Deck Hold’Em offers free, sponsored powerups that let you stack the odds just a tiny bit in your favor.

Though the game starts you off with a $200 buy in and $10 bet limits, you can work your way up to no limits tables and eventually a $20 million buy in for the big spenders. You can also rank on the Biggest Hand leaderboard and collect Game Center achievements for beating the AI, winning with specific hands and winning or losing big. It’s enough to keep the biggest Hold’em fans busy for a long time.

Early on, however, don’t be surprised if you have some trouble with the game’s interface. It’s largely lacking the little considerations that help players orient themselves. A more obvious turn indicator would be nice, for instance, and with such a big screen to play with, it’s strange that the betting controls are jammed into the lower right corner. It would also be nice to be able to see how much you’re betting, even in limit games — especially since new players may not immediately understand how betting differs when there are limits. There’s a lot going on in Full Deck Hold’Em, and a little hand holding really wouldn’t hurt.

But those things are fixable, and according to the developer we should see improvements to the interface in the first update. The big stuff is all in place, with AI that’s up to a challenge and online multiplayer that’s made even better with video chat. If you have even a basic understanding of how to play Texas Hold’em, you won’t have any trouble digging deep into Full Deck Hold’Em — and if you don’t, I’m sure the kind people in our discussion thread will be happy to help you out.