I think I fell in love with Mega Mall Story [$3.99] the second I activated, inadvertently, a “frenzy” that showered my six-story mall with pieces of confetti. A dude walked in, rode my brand new elevator up to the third floor, strolled into the super market, and purchased $10,000 worth of organic goods. Hearts popped up over his head a little later, which gave me enough points to research the bookstore I had my eye on. With his cash (and others) in-hand, I built it and decided to put the rest towards a community project that would bring in even more customers.

Moments like these happen once every five-to-ten minutes in Kairosoft’s latest simulation, which puts you in the shoes of a bustling mall’s planner, a mall’s coordinator, a mall’s CEO, and a close-proximity real estate tycoon. The last conceit is the most compelling one: few tower games give you control over more than the tower itself. Being able to raise up a community by purchasing house, parks, parking lots, and more gives you a unique stake in the outside world. It makes you feel like the universe is your baby, not just the mall. 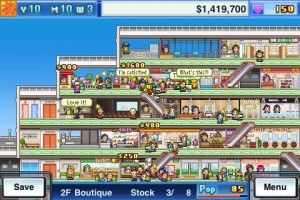 Outside of this, Mega Mall Story doesn’t do anything mechanically that other titles in the studio’s fascinating line-up hasn’t already. The point, as always, is to profit and hit a certain status by buying new shops, unlocking new stores, combining places to maximize the selling power, and cater to a specific audience in the fastest way possible. Fast is a theme in general, as you’ll need to service people as quickly as possible by building elevators, stairs, and escalators amongst your stores.

As you plan, you’ll upgrade and endlessly iterate on what you’ve already built. In Mega Mall Story specifically, shop upgrades such as increased stock, new stock, and quality are handled via a social currency: hearts. When people like what you’ve done, you receive a few of these. Kairosoft is generally pretty good at making people matter, and this micro-game is as important and fulfilling as ever.

Even if you aren’t turned on by the social component, the grand carrot-on-the-stick approach that Kairosoft has mastered is probably enough to keep you going. In this game particularly, almost everything you do nets some sort of reward. Build a store and people come to it? It levels up. Reach a certain popular status? You get a buying frenzy. Reach goals set by a ratings commission? Your store becomes even more powerful. Build a recreational park? Hey, wouldn’t you know it, more upgrades are now available! 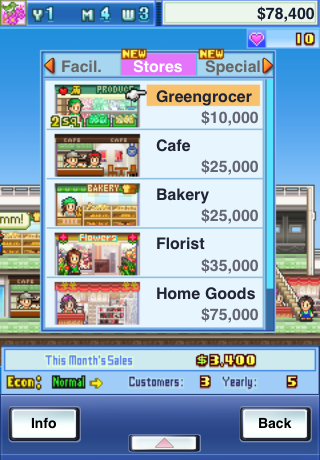 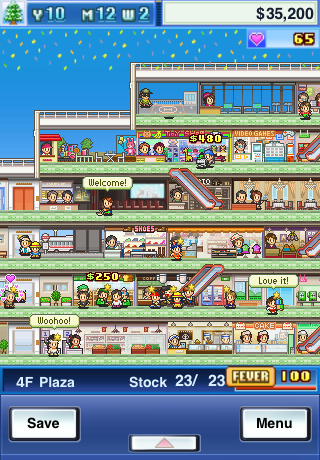 In some ways, this can be the most frustrating part of the game. When you first start out, you have a mental image of what you want your tower to be and how you want to build. But, as you progress, the game tortures that image and, eventually, breaks it by introducing stores and features in the stream that it does. On the other hand, it’s a heck of a driver if you can get over your OCD tendencies. Also, Mega Mall has a pretty rich suite of re-building and moving functionality because it’s aware of how it could theoretically burn you.

Aside from a few game-side logic quibbles, the one problem that I have with this game is that it’s a mess to control, particularly when it comes to the camera. Your tower will eventually get bigger than the screen can hold, which means you’ll need to scroll from side-to-side as you plot out your Next Big Thing. Meanwhile, you’ll probably click on stuff you didn’t mean to or, as I often do, accidentally “remove” items that I didn’t want to. Connected to this issue is the fact that Mega Mall is, straight-up, an extremely visually busy game. The iPad 2X option helps you with the mess by sheer virtue of it blowing the image wildly out of proportion.

I’m not sure that this thought will be shared by other Kairosoft fiends (like the ones in the thread in our forums), but as I’ve been exploring Mega Mall Story I’ve convinced myself that this is its most cohesive title. All of its pieces fit snug and everything you do contributes to a whole package. It’s also one of its most wide-reaching games, combining social and sim aspects from all over the place. I don’t know what else I want, and that’s really the greatest bit of praise I can give it. Go download it, already.