Battleship is one of those rare games that seems to fit in the computer gaming world even better than the physical board game world in which it was created. There’s nothing like the tension while playing a friendly match with a buddy. In many ways, that tension is what makes a simple game like Battleship so appealing.

Battle Planes [$1.99] tries to invoke and expand on that appeal by taking the Battleship formula and twisting it a little by adding some variety and personality to the mix. While overall I would say Battle Planes does succeed in capturing some of that magic, some questionable design decisions prevent it from taking the helm as the best choice for this genre.

At its heart, Battle Planes is a tried and true Battleship clone: You and your opponent (Human or AI) put your three planes on a grid, and then take turns trying to hit and destroy the other’s aircraft. Where Battle Planes tries to soar above the competition is in its changes to the core formula. 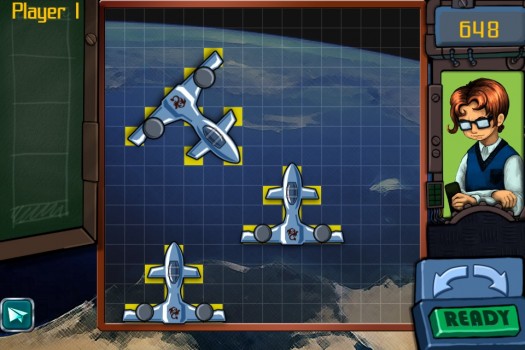 For example, instead of horizontal ships of various lengths, your planes take up different sorts of shapes on the grid. In addition, you can choose from one of ten different characters, and each character has a different plane design (and thus takes up different spaces on the grid). Also, while the goal of Battleship is to eventually land a hit on every single space that a ship inhabits, your goal in Battle Planes is to take out the ‘weak spot’ on a plane, which is typically the front of the plane. Land a direct hit on the nose, and the entire plane instantly goes down.

This adds an interesting strategy element to Battle Planes — since each character has a different plane design, your decision on where to hit will change depending on who you go against. It doesn’t alter the core mechanics in any significant way, but it is a welcome change and does a good job differentiating itself from other clones. 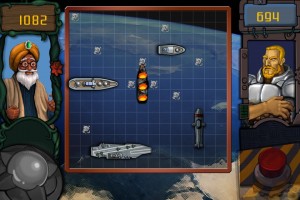 Battle Planes offers a single player mode, as well as a 2-player mode via Bluetooth, single device pass-and-play, and Game Center. While I was able to play some stable games over Bluetooth, I had some issues starting matches via Game Center. There is a story in Battle Planes that is told through character bios, but it’s so strange that I really wasn’t sure what to think of it. In addition, Battle Planes also offers a “Battleship" mode, which does away with the varied plane designs and opts for the tried and true standard ships.

While all this sounds pretty nice, there are some issues with Battle Planes that seem to hold it back from new heights. One of the biggest issues I encountered is the lack of a ‘Quit’ option while you’re playing a game. If you’re playing a game against the AI, and you decide to start one with a friend, you cannot stop the game unless you force quit the whole app. This sort of UI misstep just seems bizarre to me and definitely detracts from the overall experience. 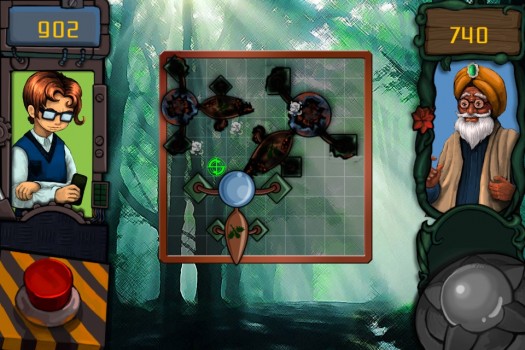 Also, while the game incorporates a ranking system in both the single and multiplayer modes, I just couldn’t find any reason to play against the AI (that, and I have a strong suspicion that it cheats). While this isn’t necessarily a big deal (who plays single player Battleship anyways?), it does lead to the question as to whether it’s worth spending cash on a game that is really only enjoyable with other people.

However, if you do have some friends interested in a decent Battleship clone, and you can look over some of the quirks mentioned above, Battle Planes may be worth checking out. In the end, what matters most is whether that feeling of tension and enjoyment exists when you’re playing against another person. I’d have to say that yes, Battle Planes does just hit that horizon.