One thing about Shift 2: Unleashed [$5.99/HD], just real quick: Don’t bother. If I had to summarize EA’s latest Need for Speed sim, it certainly wouldn’t involve the word “unleashed." This is about as misleading a subtitle you could attach to something so tame and afraid to do anything outside its comfort zone.

I’m still high off the faster, crazier NFS: Hot Pursuit and the dialed back Real Racing 2, I think. Shift 2 exists in a limbo-like spot somewhere in between those titles, with a slightly heavier weight toward the realistic racing, which is something the franchise has only recently started dabbling in. We loved the first Need for Speed: Shift because it nailed what we wanted from a console approximation and it was a convincing, competitive iOS sim-racer. This sequel hits those same notes, but the standard, and thus what I expect, has raised since. 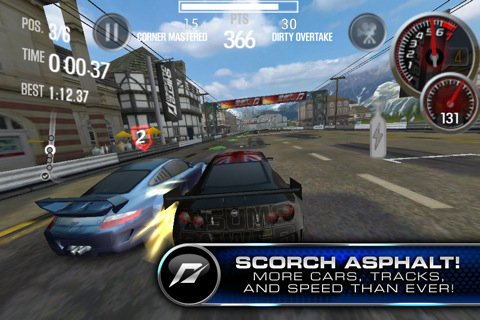 The idiots on your morning commute are probably evidence enough that passing the driver’s test doesn’t make you a great driver, just the same as Shift 2‘s isn’t a great game because its basics are up to snuff. The sum of A Bunch of Cars and A Bunch of Tracks doesn’t amount to much, particularly because there’s little to differentiate the vehicles from one another beyond their look and stats. At least upgrading the speed, tires, brakes and all that jazz gives your ride a feel akin to actual driving. The tilt-turning sensitivity is as stellar as it’s ever been in these iOS versions of NFS, particularly when turning off the driving assists.

Vehicles move faster as you move up the tiers, graduating from the D-class to C to B and so on, which is a structure so straightforward I found myself struggling to stay interested. I didn’t feel like I was grew and improved as I moved up the ladder–more like I was checking chores off a to-do list that rewarded me with more mediocrity. Unleashed worked great for scratching the upgrade itch the series always gives me, at least. 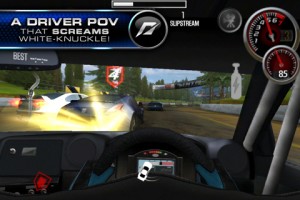 Speaking of which, EA, it’d be far more enjoyable to let me improve cars at my own pace. Stop nagging me to spend real money on in-game cash every couple of races, yeah? Those incessant pop-up ads are really annoying. On the other hand, I didn’t mind the interruptions encouraging me to use Origin, EA’s new digital distribution service. I dig its implementation here–I tap the Origin icon and I can send challenges to current friends, add new ones, and play around with my profile. It’s early, but the potential here for a universal in-game social network for EA titles is fantastic, and I can’t wait to see how future games expand on the basics of daring someone to do better than you.

Most of all, I was caught off guard by the demanding difficulty of Unleashed, actually, and I consider myself a solid driver (at least when it comes to video games, let’s not talk about my real-world insurance). Earning stars for first-place finishes and stylish, flawless maneuvering earns stars, and even at the C-level I struggled to earn enough to advance to the next set of time trials or 1v1 duels. I ended up replaying older races endlessly before burning out on Need for Speed playing it safe.

Shift 2 understands the racing genre like the best of ’em, but coasting on its competence and expecting us to adore what others (including EA) have done better isn’t enough. So, yeah, once again: Don’t bother. This is a bland, boring racing game compared not only to previous iOS Need For Speed titles, but also other racers already on the App Store. Wait for the inevitable iOS port of Need for Speed: The Run, which is so fundamentally different from the rest of the series that I gotta believe it’ll be the refreshing change of pace we all wanted.