If you’re not familiar with Venan Entertainment’s Space Miner [$2.99], let me get you up to speed. In a nutshell, the game is incredible. So incredible in fact that it was our 2010 iPhone Game of the Year. It’s an awesome modern spin on the Asteroids formula with light RPG elements, a lovable game world, and upgrades out the wazoo for your ship. Additional difficulty modes (including a super-difficult perma-death mode) add a silly amount of replay value, making Space Miner one of the few iOS titles I’ve ever replayed from start to finish multiple times across multiple difficulties. In other words, you need to check it out. 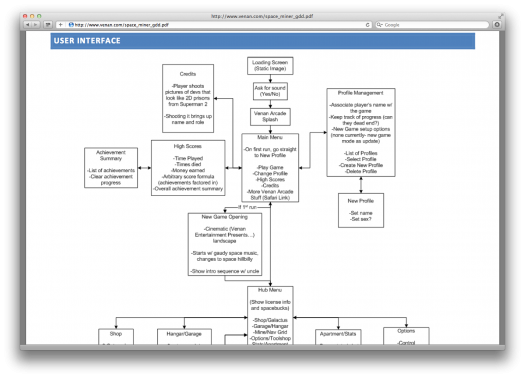 This weekend Venan released the game design document for the game, and while it doesn’t really reveal anything new or exciting that we already didn’t know, it’s really cool to take a look at what was the foundation for one of our favorite iOS games. It’s also totally worth a read if you’re an indie developer, as a solid game design document like this can really ease development as it serves as such a fantastic reference point to keep everyone on the same page throughout the pre-release life of the game.

We’re still torn up over Venan announcing that a Space Miner sequel was being shelved, but we’ve got our collective fingers crossed they eventually pick the franchise up again.