Just yesterday, we learned that developer Zeptolab had a sequel in the works for their astoundingly popular physics puzzler Cut the Rope [99¢/Lite/HD]. Given the huge success of that game, a sequel doesn’t come as a surprise at all, but the teaser images did pique our interest as to what changes the developers would be adding to their winning formula. Unfortunately, there really wasn’t any solid information to go along with the screens.

Now, TechCrunch has learned straight from Zeptolab themselves some new details on the title, which will be called Cut the Rope: Experiments. The premise this time around is that main character Om Nom arrives on the doorstep of a mad scientist, and like everybody who has played the original game, he wonders just what the heck Om Nom is. So, in order to get to the bottom of things, he begins performing various experiments on Om Nom, which we would presume act as the levels themselves. 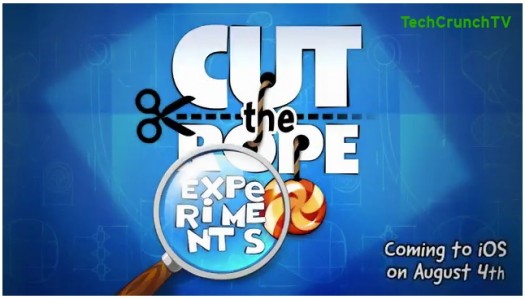 TechCrunch has the first trailer for Cut the Rope: Experiments, which is a total teaser and doesn’t show any gameplay, but does reveal that the game is already launching on August 4th, which is basically later tonight here in the US. And indeed, the game is now live in the NZ App Store and early impressions are rolling into our forums. Interestingly, Cut the Rope: Experiments isn’t being published by Chillingo as the first game was, and rather it’s self-published by ZeptoLab themselves. If you remember, another popular Chillingo published title, Angry Birds, did the same thing with their two follow-up titles. I guess when you become practically a household name, it doesn’t make sense to fork over part of your earnings to a publisher.

But more importantly, I’m curious to get my hands on Cut the Rope: Experiments tonight to see how it stacks up to the original, and you can bet we’ll be back to let you know what we think of the title.