Emotional Robots’ Warm Gun will pull your eyeballs out of your head at first glance. It’s got a unique look: it’s a sci-fi, class-based FPS set in a post-apocalyptic second coming of the wild, wild west. Think Red Dead Redemption meets Borderlands, except the Borderlands part is just icing on the grit-and-sand cake. The game first hit our radar earlier this year when it was announced for an iPad, iPhone, and iPod Touch release alongside its PC launch. At the time of that report, we didn’t have a release. And while we still don’t have an exact one, we do have a window now: August, so says a studio rep.

We’ve also since seen the first footage of the iOS version, too. Just the other day, actually, the studio dropped a pretty stellar teaser trailer of the game running natively on the platforms. And if you can’t already tell, yeah, this is an Unreal Engine 3 joint.

To hear Emotional Robots explain it, the decision to port the game had a lot to do growth and popularity as a studio and for the game. Emotional Robots took the opportunity that Epic has given developers with UDK as a challenge and as a way to “break into the industry and get gamers familiar with Warm Gun.” At the end of the day, it believes its created not just one, but two unique experiences for PC and for mobile respectively.

It’ll be interesting seeing how the iOS counterparts play, as a keyboard and mouse is arguably the ideal way to play a FPS. In an e-mail chat, the studio addressed my concerns to some degree, stating that the controls on iOS devices are definitely a key point of interest and it’s creating multiple schemes for players to get comfortable with.

“We are constantly updating and tweaking the controls and will be offering multiple control schemes,” executive producer Zach Lehman said. “ We realize that using touch screen to control a FPS is limited in some ways, so we are trying to cover as many bases as possible by doing extensive testing and offering customization where we can.” He also mentioned that users will have a hand in the future of the controls — as I was reminded several times, it wants feedback from enthusiasts. 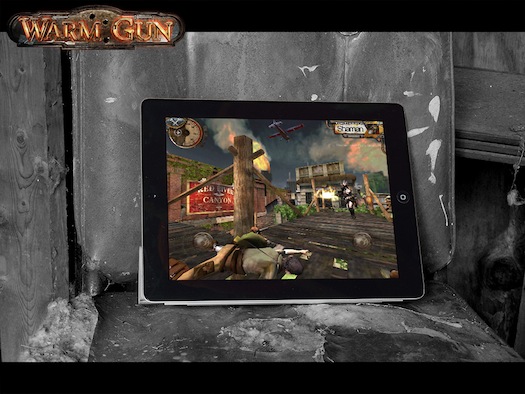 The fact that Warm Gun iOS will be a port of a promising, technically-cool property that was once scheduled to hit a standard platform doesn’t come as the same kind of surprise as it used to. We see this happening a lot as mobile devices in general are increasingly becoming more legitimate platforms in ‘traditional’ video game makers’ eyes. Lord knows they’ve demanded the market share for awhile.

“Warm Gun‘s level of graphics combined with the freedom given by an FPS that isn’t ‘on rails’ is still rather unique to the market,” Lehman told us when we asked what differentiated the title from others. “In the past, we’ve had a lot of comments regarding our art style (and it being compared to games like Borderlands or Red Dead Redemption). While we recognize the similarities in atmosphere, that’s pretty much where it ends.”

“Warm Gun offers a fast paced, gun-slinging experience with 12 unique weapons, 4 unique characters and 5 very different maps. We will also have achievements and honors that you can flaunt in front of your friends after you dominate them in a match.”

No word on price yet, but we’ll pay whatever for the promise of Warm Gun.