Lavafish Studios’ Squirmee and the Puzzling Tree [99¢] might look like another iteration on the tried and true one-screen puzzle game action of the App Store, but even though it initially follows the formula, it quickly turns into a brutally difficult game that will tax your brain and force you to rework your inner circuits to get through it.

You play as Squirmee, a blob-ish thing with the power to manipulate your environment as you attempt to rescue your sister from the top of a tree. To do so, you’ll need to move along a track to get to a star at the end, the quicker you do so, the more stars you’re awarded.

While it might not make sense until you’ve actually played it, Squirmee and the Puzzling Tree is a lot like Super Meat Boy flipped on its head. Instead of controlling an avatar, you’re controlling the environment, but the same perfectly timed actions are required.

What sets Squirmee apart is its intuitive, albeit slightly complex control scheme. Each of the objects in the game – whether it’s the buzz saws, the platform you travel on, the enemies, or the globs of goo – are color-coded. Each color behaves differently depending on the gesture you use. Some stop when you touch the screen or only move when you’re not touching the screen, while others can be rewound with a touch and a slide. Each color has its own pattern and reacts depending on how you gesture. Because of the rewind slide, the universal app works a little better on iPad, but once you get the hang of the controls, both work well. 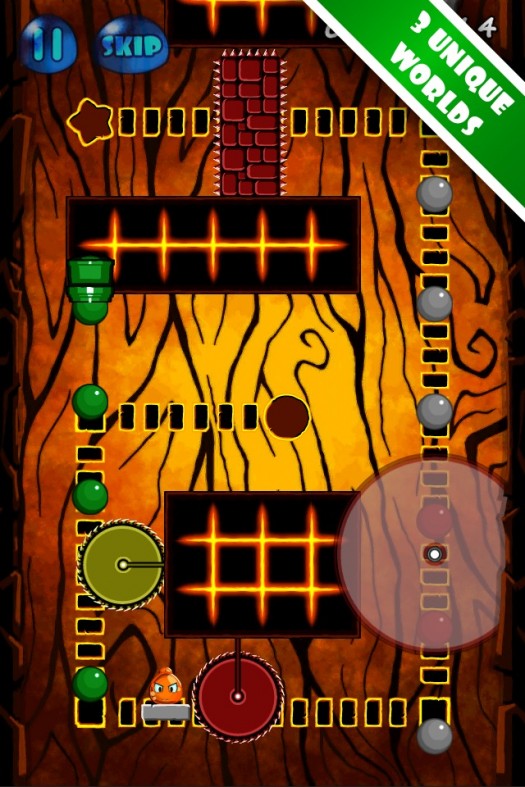 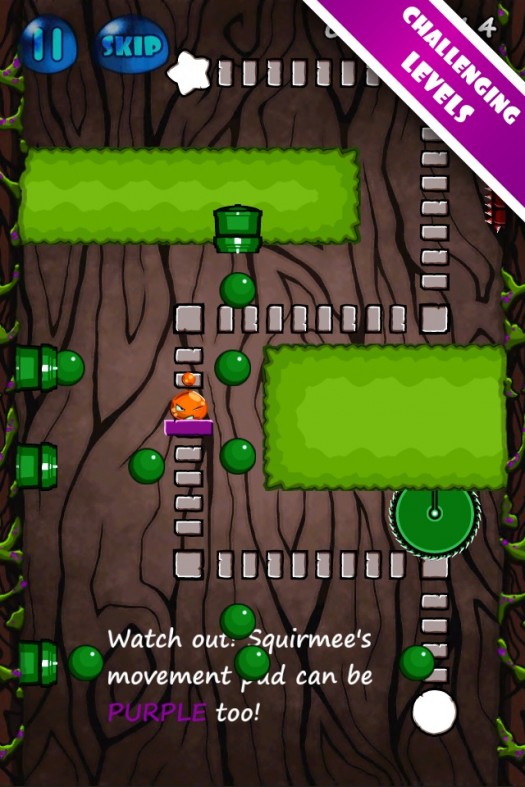 That’s all well and good while you’re working with only one or two colors, but when the game starts throwing three or four iterations at you, it becomes an incredibly complex, often brutal experience. That’s not a bad thing by any means, but consider it a fair warning. Squirmee requires not just multi-tasking, but the ability to see multiple core game concepts at once and utilize them to get through a level. You’ll often be required to stop time for a moment, flip it back and reverse it the next, all while keeping an eye on the buzz saw that only moves when you don’t touch the screen. It’s brilliant in much of its level design, but it’s unforgiving in its difficulty.

Thankfully, the game features a skip button that lets you bypass frustrating levels. You’ll be able to get through and experience most of the 75 levels even if you get stuck, provided you can at least beat the boss at the end of each level. It might seem like a cop-out, but Squirmee isn’t as accessible as it might look, so the skip button is a conceit that works well here. It’s a good thing controls work well as the game’s frustrations don’t stem from the feeling you’re getting cheated, it’s all about you and your ability to master each screen.

There’s no cliché more apt as a description for Squirmee than “looks can be deceiving". The cartoon graphics and collect-three-stars system might sound like an indicator for simplicity, but the game complicates things quickly. It’s by no means a bad thing, but it’s certainly something to be aware of. Cartoon graphics aside, this is not your typical physics based puzzle game. There is full Game Center support for leaderboards, but it only tracks your time on each of the three worlds as a whole instead of each level. It might have been nice if the leaderboards included each stage, just to add a bit of an award system to keep you moving along.

If you’ve been itching for a complex, difficult puzzle game, you won’t find much better in the App Store, but be forewarned, there is a reasonable chance you’ll be tossing it across the room by the end of it.