If you’re not familiar with the original board game, you won’t be as completely lost as you might have been with Neuroshima Hex. Army of Frogs has a relatively simple ruleset. The goal is to claim territory for your color’s frogs. To win, you need to string at least 7 of your frogs together, leaving no loners behind. Your competitors, 1-3 human or AI players, are trying to do the same, and they’re also trying to block you from succeeding.

Each turn you can move a frog of your own, jumping as many times as you’d like in a straight line to the next free space. After that, you need to place one of two randomly selected frogs on the board. It might be yours, in which case you’ll try to place it somewhere you can easily jump it to your others, or it might belong to an opponent. Then it’s your job to try to place it so it can’t reach its brethren. 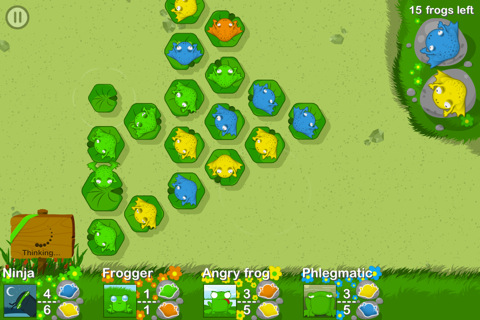 Unfortunately, like it’s older sibling Army of Frogs does a fairly poor job of introducing those rules and goals. The game includes a lot of documentation, but a playable tutorial would do a much better job. As it is, expect to flounder around for your first few games while you sort out exactly what you can and can’t do, and then re-read the manual to fine-tune the details.

Once you work all that out, Army of Frogs is a lot of fun. If you have someone (or someones) to play with locally, it’s a blast. Games are short but sweet, and strategic without being bogged down with complicated rules. If you don’t have anyone to play with locally, you’re in a bit of a bind. You can play with AI, but victories feel a bit hollow with no overarching campaign. There are Game Center achievements for beating the AI opponents, but they’re quick to burn through.

You can also play online, but here Big Daddy’s Creations really dropped the ball. The player base isn’t yet large enough to find a game quickly, so most people start games and leave them idling while they fill. Since the game currently lacks push notifications for turns, this means most online games never actually get off the ground. I bet it will be a lot of fun to play with three other players online, but I can’t say for sure. I’m still waiting for my turn to come around in every game I’ve joined.

Given a few tweaks, Army of Frogs could be well worth the price of admission. Until then, though, I’d caution you to only hop in if you’ve got someone local to play with. You’ll find a well-designed game that’s a lot of fun to play — but the pond is awful lonely if you go it alone.