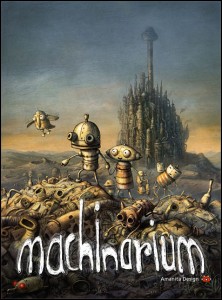 The obvious choice for the oft-teased tablet-bound version of Czech studio Amanita Design’s gorgeous and moody point-and-click Machinarium has always been the iPad because of its reach, but the whole “Apple doesn’t support Flash” thing has been the stumbling block. Good news, though: apparently a non-flash-based iPad version of the title has actually been in the works, and in even better news, it’ll hit the App Store next month. Neat!

“It’s almost finished, but we still need to fix a lot of small bugs and test it properly. It should be ready during the next month… hopefully." Amanita founder Jakub Dvorský, told Pocket Gamer.

Amanita has remained busy since the Machinarium’s initial release in 2009. Machinarium has since seen a release on Mac and a PSN version is slated to hit this fall. The studio has put out a sequel to Samarost, Samarost 2 [$2.99], across various platforms.

It’s hard not to pump your fists for these guys. Despite Machinarium‘s low and flexible price point, it has been pirated a ton, kinda like another equally imaginative and price-flexible title, World of Goo, was / probably still is.

At one point, both studios reckoned that only around 10 percent of the players who had the games actually paid for them, which is disgusting. Here’s to hoping that the Machinarium iPad port is good in the first place, and subsequently gets the feature love that World of Goo [$4.99] did upon its App Store debut.

We’ll be looking at this after it releases, but if you’re totally in the dark about the game, there are a billion and one reviews out there to look at.