We’ve been keeping an eye on Dream Track Nation [$0.99] since we caught a peek of it on Chillingo’s YouTube channel earlier this year. Even back in the depths of April, it looked like a leader in the 2D physics racing genre. Now that it’s reached the finish line, the question remains — is it a winner? Well, it’s complicated.

If you’re really into games like the Jelly Car [Free] series, then you’re going to want this game. It has familiar 2D cars and levels, similarly wacky physics and a lot of content to enjoy. A ridiculous amount of content for its $0.99 price tag, in fact.

The sheer volume of content is Dream Track Nation’s main selling point. The game includes 60 levels that can be played in star collect mode. Then you can play them again in time trial mode, which is a notably different experience. Throughout these modes you’ll unlock vehicles to play with. You can also play the official levels against another racer in multiplayer mode. If you get bored of the built-in content, you can download new levels made by other players. Any time you don’t feel like racing, you can work on building your own masterpiece of a level, which you can then upload to share with the world at large. It’s frankly unreasonable that a game with so much content should be so cheap. It’s basically Sony’s whole “Play. Create. Share" model wrapped up in a one dollar package. 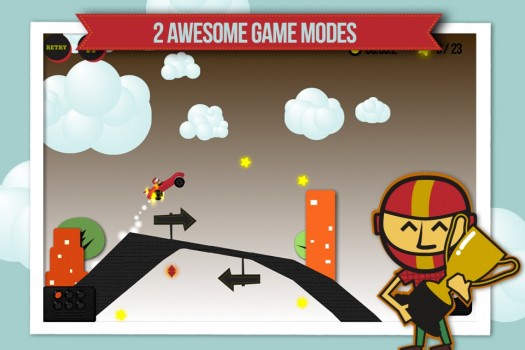 So now I’m left in an awkward position. On one hand, this game is definitely worth the price of admission. On the other hand, I didn’t enjoy it nearly as much as I’d hoped to. There are a lot of problems in Dream Track Nation. I can count on one hand the number of times I fell through a solid section of a level, but that’s still a handful too many. The difficulty curve is also out of whack. Early levels can be completed by doing little more than holding the forward and reverse buttons at appropriate times, but so can some later levels. And some in between are incredibly difficult, relying on careful exploration and jumps that require a speedy car and a good amount of luck to complete.

I could take or leave the game’s physics. Sometimes driving through a level feels fast and fantastic. Other times it feels like a struggle, leaving you tapping back and forth and desperately rotating your phone just so to get by. Many levels rely on spring pickups and items that let your vehicle float, which don’t feel nearly as good as speeding through loops and taking great jumps should. Switching the tilt controls to on-screen controls made things a little better, but I still found myself teetering on the edge of an assortment of platforms too often for comfort. You can do tricks to shave time off your final result, but opportunities to pull them off feel too far apart. Mostly you’ll be rotating or hitting the tilt buttons to right yourself after yet another awkward landing.

Multiplayer is also a mixed bag. It’s fun when you can get it, but finding another Game Center player waiting to go is a trial, and then you have to hope that they’ll stick with the game for a while. If you have a friend to play with you, multiplayer is a lot of fun. It’s only been a couple days, so hopefully a larger install base will make random multiplayer fun too.

The level editor has a lot of potential, but there’s currently a lot of bad up there for a few good levels. And it’s hard to blame people for putting together basic test levels to see how they run. With no tutorial for the level editor and no check to ensure only playable levels get uploaded, there’s really no reason not to toss your baby steps into the ring.

I’m coming down harder on Dream Track Nation than I’d like. It’s a fun game, and there’s enough content here to keep you occupied for hours. If you like 2D physics-focused racers and you’re okay with touchy physics and a game that could still use a little smoothing out, you should definitely get this one. The art is charming, the music isn’t half bad and the game is a lot of fun. It’s just a little rough around the edges. Folks in our forums are largely pleased, and so was I. I just hope to see things get cleaned up a little as time goes by.