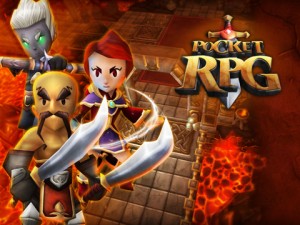 Crescent Moon Games’ Pocket RPG [$2.99] got off to a bit of a rocky start on launch when it was released with some game killing bugs and pulled immediately from the store, but now those have been smoothed over, everyone with an iPad can freely stick an RPG in their giant pockets and take it for a spin. It’s equal parts RPG, shooter and light-brawler depending on how you play and although it might seem shallow based on its name, it has a lot to offer.

Pocket RPG can be played with three different character classes, Dark Ranger, Battle Mage and Blade Master. Each has their own skill sets and each play completely differently. If you’re looking for a more straight-up duel-stick shooter, the Dark Ranger is for you. If you’re into hack-and-slash, go for the Blade Master and if you’re looking for a strange combo of the two, go for the Battle Mage. Each character is well defined and changes the way you play the game on a fundamental level. 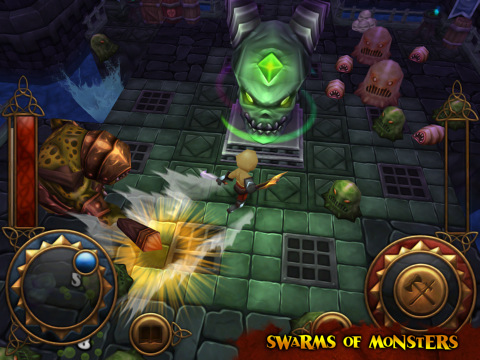 Each character class gets their own save file, one each. It’s a bit confusing at first, because it will initially appear that you only get one save file across the game. As people have pointed out in our forums, the Resume button on the main screen will lead you to the most recently played character and if you select New Quest and another character, you’ll continue where you were last at with that character, even though it gives you a warning your file will be overwritten. It’s far too confusing of a system and needs to be cleaned up in future updates.

As an actual game, Pocket RPG delivers on its title. It’s essentially a looting, mini-roguelike that plays similar to a dual-stick shooter. The main difference is your character’s progression isn’t tied to the game as a whole, but rather to each individual dungeon. You’ll have certain power-ups and skills you upgrade over the course of the game, but after beating each dungeon, your experience points and loot disappears and you start all over again.

It’s a strange system, but it works surprisingly well, albeit at the cost of incentivizing any hardcore loot hoarding. You won’t get attached to any weapons, there isn’t any real armor loot and you won’t ever have to struggle with inventory management, but the games title should be enough of an indication this isn’t a hardcore experience. As far as XP is concerned, you level up quickly in the later levels and it’s hardly noticeable that you have to start over in each dungeon. It plays like an incredibly short roguelike. The one difference is that you’ll usually pick up an item early in each dungeon that’ll grant you a single extra life. If you die a couple times, you have to start the dungeon over. 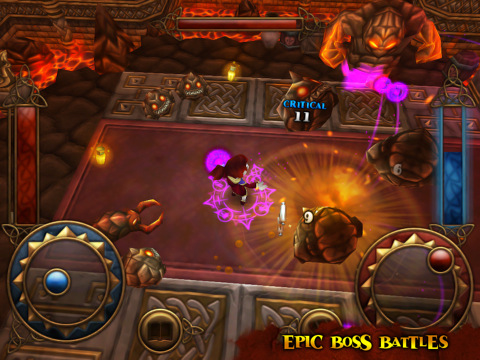 The persistent upgrades you make to your character at the end of each dungeon are important and add enhancements to the character progression. You get these by bringing in gold and stars from each dungeon encounter, both successful and unsuccessful. Each character has their own set of skills and special moves controlled by different gestures. For instance, if you’re playing as the Dark Ranger, you can add a skill that shoots out poison if you quadruple tap the right stick. It all works well and adds a feeling of character customization lost by the lack of persistent XP, but it would be nice if there was a move-list in-game in case you can’t remember which gestures create which attacks.

As we’ve come to expect from Crescent Moon, the character designs are cutesy and cartoony. The environments are well thought out and almost everything on the ground is destructible for loot hoarding, which is a nice touch. Since the dungeons are partially randomly generated, you’ll be able to play though multiple times with a new experience, but since each character plays so differently, it’s more worth playing through with each of them once then with one of them multiple times. The dungeons are never overtly complex mazes either, there are a few forking paths throughout, but you’ll rarely find yourself wishing there was a map.

There is quite a bit of content here too, with six different areas to explore and as many bosses. Despite it’s seeming simplicity, the game can get pretty tough toward the midway point. It’s not enough to send anyone home in tears, but chances are you’ll have to repeat a few dungeons here and there to grind your skills up enough to beat the final boss.

Pocket RPG is a little different than you probably expect from a looting game, but that’s not really a bad thing. It’s bite-sized, but versatile, which means you get a lot of length out of it even if it’s pretty simple to get through initially. RPG fans and dual-stick shooter fans will have a lot to love here and provided they can add a few tweaks to the menu system they’ll have a remarkably solid game. For those looking to get the action into a reasonably sized pocket on iPhone or iPod Touch, Crescent Moon Games has said a new version will be available in around a months time.