Back in March, I felt luckier than a field of four leaf clovers when I was among the first to see Fruit Ninja [$.99 / HD] creator Halfbrick’s latest side-scrolling title, Machinegun Jetpack. It’s a mix of infinite runner and shooter like Monster Dash [$.99 / HD]. Heck, it even stars that game’s hero, Barry Streakfries. Where it departs is where it draws its namesake: during the entirety of the experience, you’ll be strapped to a jetpack that spews bullets.

Back at the event in San Francisco that March, I was told that the game should have been out about… well, right now. I have an update on that: Halfbrick says that the target is now late August, and it’ll definitely hit within the next two months. The team inside Halfbrick on the game is doing a final critical pass, adding in features and tweaking the existing ones for the best possible experience. 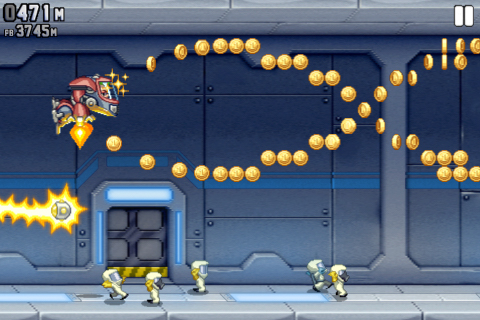 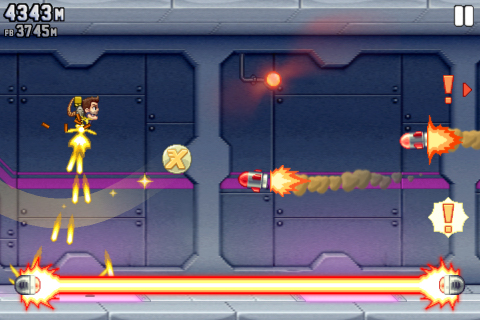 I’ve also been told — and you’ll hear this later in the podcast this afternoon, if you’re into our audio — that Machinegun Jetpack will support IAP. As you play, you’ll receive coins that you can exchange in “The Stash,” which is a place that operates as an item and upgrade shop. With IAP, you’ll be able to buy more coins with real cash or, if you want a little bit more of a challenge, buy a machine that doubles the coins you collect organically.

Before you jump out of your seat, Halfbrick realizes that IAP can shred game balance, so it’s designing the game for people who aren’t going to purchase coins from The Stash. The IAP is just a way people can earn and use faster. Think of it like a cheat code of sorts — a cheat code that costs money.

Anyway, Machinegun Jetpack will still debut as a Universal app with Game Center at 99 cents. I’m still trying to figure out what I’m going to do with myself until it hits.