Halfbrick, the studio behind the enormously popular fruit homicide game, Fruit Ninja [.99 / Lite], are about three months away from debuting a brand new title on the App Store. And there’s a twist: it stars a familiar face, Monster Dash’s [.99] Barry Steakfries.

Actually, Steakfries and Monster Dash are great starting points when describing this upcoming title, Machinegun Jetpack. It looks and works a lot like Monster Dash. It’s a traditional runner, so it has a lone, endless level and randomly generated content. 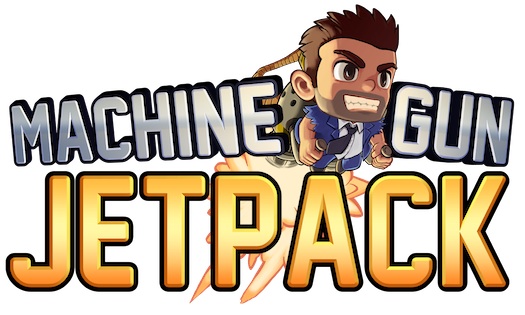 Where it differs, it really differs. Instead of controlling a protagonist who can merely run, you control an avatar that’s hooked into a jetpack. Tapping on the screen keeps Barry afloat, and you’ll need to do that to avoid all the vertical obstacles such as electricity or rockets or lasers.

Ratcheting up the intensity of the experience is a goal of Halfbrick’s. Perhaps the best example of this is in the “vehicle” pick-ups that give you control of a robot reminiscent of ED-209 or even the motorcycle from Monster Dash. There’s also a special gravity suit that lets you to run on the top and bottom of the screen with a tap, and a teleportation power that allows you to jump all over the level.

Here’s a video of the game in action from our demo at GDC in San Francisco. The first part is footage from the iPad version; the other is the iPhone version.

At the demo, I was more impressed with the amount of side content as opposed to the explosions, which to be frank, is a little out of character for me. As you play, you’ll collect coins that you can then, in turn, spend on upgrades to your jetpack. You can also pick up bigger coins that, at the end of a single play, give you the opportunity to use a massive slot machine. If you’re lucky, you’ll earn rewards like double coins on your next play or even a Continue that puts you back in the game right where Barry fell. This is good, game-expanding stuff that adds a little more to the “just one more time” play.

Machinegun Jetpack is still three or so months out. Halfbrick told us that it plans to launch the title as a Universal game complete with Game Center support. The target price is also 99 cents, so get ready to take the plunge a little later this year.