Ronimo Games’ Swords & Soldiers [$2.99 / HD] is a stripped-down, side-scrolling RTS that offers a decent amount of creative situational content inside a shell that otherwise doesn’t torture standard genre tropes. The gorgeous visual direction and whimsical writing emits an unusual, but comfortable warmth. Most levels boast sharp, sometimes dramatic change-of-pace mechanics or objectives with different factions. And there’s several different types, and modes, of play mixed into and out-of its feature-complete and content-rich campaign. Yet, at its core, this is still a game that revolves around troop spam just like all the others — it’s this other stuff that makes it a unique offering.

Sword & Soldiers first appeared on downloadable console platforms in 2009 and later on PC and Mac. Nothing I’ve noticed has been added since those respective debuts aside from the touch implementation found in this specific version, which is smooth to the point that it feels natural, as if this was the lead platform. 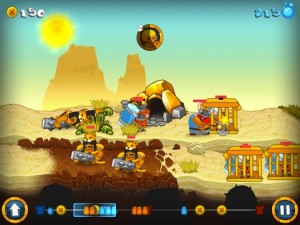 There are three goofy, well-animated factions: the Vikings, the Aztecs, and the Chinese. The campaign mode boasts three separate mini-campaigns using each where you’ll see the qualities that separate each faction from the other. The Aztecs boast mechanics that revolve around death. The Vikings, on the other hand, heal with spells and use defensive structures, while the Chinese can conjure statues that bolster spell casting. The mini-campaigns’ weaves are a part of the whole tapestry and they spin into each other after a few missions. These plot points are as satisfactorily offbeat as the overall aesthetic.

To the game’s credit, it often leverages the unique abilities of each faction in missions, but the moment-to-moment action revolves around “troop spam” tak. It counts on it, in fact, because the game, at its core, is about management: can you manage building gold miners while also babysitting an upgrade tree and spitting out troops? That’s the typical question it asks throughout the campaign, which does, despite being somewhat mechanically dull with its defend-the-castle missions, hold up over the haul. 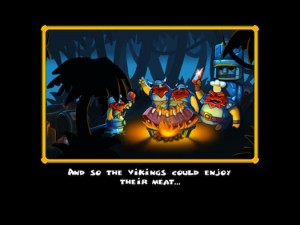 Part of what makes Sword & Soldiers satisfying is that you don’t have to budget build orders, consider micro-details, or give much of consideration to strategies. You build and fight with a small number of troops in manageable streams, while complimenting your troop attacks with muddle, attack, or defensive-minded spells. This is RTS stripped to its core, and for what it’s worth, it’s a nice, easy-going approach that I enjoy. You’re afforded time to zone out and simply enjoy the experience.

The game has a tendency to break down in some specific instances. When the AI decides to toss out globs of enemies to attack your streams of individual troops, there’s not much you can do about that other than buckle down and hope you’ve picked the right troops in your streams, else they’ll be knocking at your door soon. Also, some of the missions in the campaign mixes the action up by giving you simple defend objectives, no gold supply, or limited resources to work with. In some of these missions, it’s obvious the designers want you to use a specific tool, and if you don’t, you’ll lose fast and hard annoyingly.

There is no online multiplayer, but it does offers a horizontal local two-player mode. I don’t have a pal that would be interested in giving this a go with me, but just in general testing I’ve noticed that, like in the campaign, mass and smart spell usage are the keys to success.

Sword & Soldiers might be shackled to side-scrolling RTS convention, but it’s smart and vibrant where it counts. The HD version in particular is the best, as the extra screen space goes a long way in bringing the game to life in a comfortable and manageable way. If you’re in the mood for a full-featured title, this wouldn’t be a bad one to scoop up. I dig it, at least.

Note: Although Chillingo is currently advertising Swords & Soldiers with us, advertising has no effect on coverage or review outcomes. For more information, take a look at our advertising and editorial policies.