Just as they did about a year ago, Donut Games is throwing a “Crazy Summer” sale and offering up 3 of their titles for free for a limited time. What is especially cool about this deal is that all 3 of these games are among the back catalog of Donut games that have recently been updated with universal iPad support, Retina Display graphics, and Game Center integration with leaderboards and achievements.

Cave Bowling, $0.99 - [Review] – [Forum Thread] – Released back in January, Cave Bowling offers up a fun brand of physics puzzler wrapped in the guise of a wacky game of stone age bowling. Set the angle and power of your shot and try to knock down all the pins set up in each of the 60 stages. Just knocking down all the pins can be tricky enough, but to earn a 3 star grade you’ll need to collect out of the way bonus items too. It’s so quick and simple to retry that it’s almost impossible not to try over and over until discovering the best solution.

Paracute, $0.99 - [Forum Thread] – Not one of Donut Games’ more prominent titles, Paracute is nevertheless a really fun “fall down” style game. You control a little teddy who is floating down a cave in a parachute and must avoid enemies and the hazards of the terrain on your way to the soft pillow landing pad waiting for you at the bottom. The game is played in landscape orientation and navigating your teddy left and right is handled by touching either side of the screen. There are hearts spread throughout the cave which can be collected for an increased score, but often you’re risking a crash by trying to snag hard to reach hearts. There are 30 levels each with the signature Donut Games 3-star grading system. 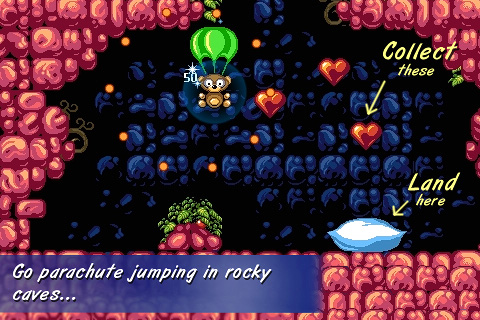 Icy Escort, $1.99 - [Forum Thread] – Similar to another Donut game Rat On The Run [99¢], Icy Escort is a platforming game with a puzzle twist. You control a mother penguin as she collects her missing penguin children who have been blown all over the game’s 30 levels. The catch is that your penguin moves on her own, so you must choose the right path through each level in order to collect all of your children and any bonus items with a fast time. There’s even a bonus mode included called Penguin in a Bathtub that’s a really fun side-scrolling avoidance game that adds nicely to the overall package. 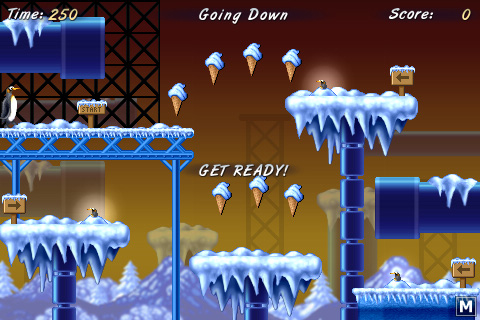 If you have yet to add any of these titles to your Donut collection, then don’t even hesitate to grab them while they’re free. Especially Cave Bowling, which is not only the game I think is strongest out of the 3 but it’s also never been free before. I also might add that it’s always a good idea to keep an eye on Donut Games in the App Store as they have a habit of having random sales on their titles. Whether free or for their standard price of 99¢, pretty much any of the games from Donut Games is a safe bet to download.