Realm of the Mad God is one of the only web-based games I care about. It’s a dual-stick shooter with RPG and MMO trappings. You play as one of several different projectile-slinging, weapon-swinging character classes in a legitimate life or death adventure that revolves around collecting loot and killing monsters. In action, it’s a delicious and chaotic mess of stat bonuses, furious collection, cutesy particle effects, trading, and quest taking.

The thing that I find so remarkable about it is how stripped-down it is. You don’t need to engage with other players, there are no quest givers, and the loot flows like water as you scramble around the world putting beasts and boss monsters on ice. And while perma-death is a mechanic, it doesn’t sour the experience. It enriches it. Your dude matters. He has a life!

You can check out the game in your browser right now and maybe, just maybe, as some point in the future, you’ll be able to check it out on your mobile device. 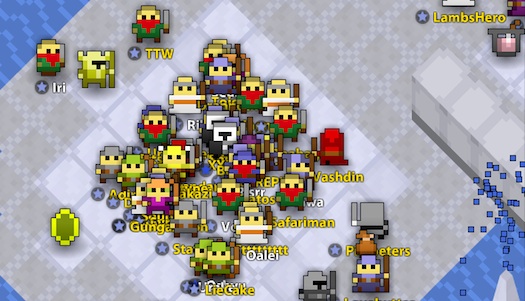 This very afternoon, I got in touch with Rob and Alex at Wild Shadow, the studio behind the game. There are no short-or-long term plans to bring Realm of the Mad God to mobile, but there’s still a chance it could come to the platform.

“We don’t really have an long-term plans for mobiles either — it’s mainly due to the twin-stick interface we’re using,” Rob told me. He mentioned that he recently gave a dual-stick shooter a go on his iPad and wasn’t happy with the virtual stick interface. I totally get where he’s coming from.

There’s also the issue that Wild Shadow would need to contract a possible port out, but the main problem resides in the controls.

“We’d love to get Realm of the Mad God onto mobiles, if we could find someone willing to do the port who can solve the interface problem,” Rob said before asking if me if I had any ideas on solving the interface issue. I bumbled about and said I would turn the question to you guys instead. So… have any good ideas? I’m desperate to have this game on my iPad or iPhone, so fire away, PLEASE.

[Big thanks to Rock, Paper, Shotgun for turning me on to this game]