Graham Annable’s Puzzle Agent [$4.99 / HD] shook up Telltale Games’ widening, but creatively dim portfolio with its differentiating tone, art direction, and mechanics. It wasn’t adventurous: it was Professor Layton with a fresh coat of paint. Puzzle Agent 2 [$4.99 / HD] is no different. It picks up right where the original left us, and brings into the fold more puzzles, more unnerving citizens of Scoggins, Minnesota and similar frustrations. While it is a more polished title, its predecessor’s missteps — deceptive puzzles, bad hints, and frame rate woes — still haunt the overall experience. It’s a good game, just not the best it could be.

Puzzle Division agent Nelson Tethers just can’t get over how his initial experience in Scoggins ended. Despite the FBI considering the case of Scoggin’s Erasers mysterious closure case-closed, Tethers uses his vacation time in order to investigate the isolated and dreary town’s secrets and discover where a missing man has gone. 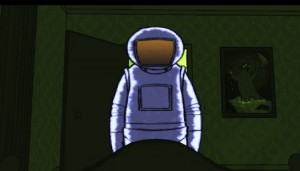 It’s a weird setup that gets even weirder once Tethers is visited by a spaceman who says the person he’s looking for doesn’t exist. But this is Scoggins; it’s a character just like Nelson is, except it’s colder, more mysterious, isolated, and has feverish secrets like this one to share. Odd Scoggins is just as much of an informant to the game’s tone and art as is it’s own writing and the Grickle universe. Puzzle Agent 2 benefits from this much like the original did — this place has an effective air of mystery and wonder, which are drivers that’ll keep you moving between plot beats.

Where it stumbles sometimes is, oddly enough, the puzzles. The Layton-esque tack taken disturbs momentum. Like in the first game, they can be showstoppers that chew at your soul with their abstract solutions. Some are just plain easy. You’ll be tasked with a rough approximation of the classic three-water jug quandary, as well as other twists, takes, and riffs on basic and advanced logic and math problems including number pattern recognition, Tetris-like path blazing, and more. Despite the frustration that can come with not figuring some of these out immediately, the challenge is nice; there’s no better reward than the “A-ha!” moment, as Portal 2 so poignantly pointed out earlier this year. Just be aware you’re going to get stuck… Or turned off by the simplicity. It’s a weird dynamic. 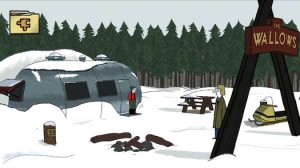 The chewing gum hint system returns, but again it dishes out vague hints that’ll have you continuing to throw your hands in the air. Out of the three hints you get, the third really needs to just give you the answer. There’s no point in stretching out befuddlement. Like last time, these pieces of chewing gum are scattered all over the environment.

Sharp writing and good dialog punctuate the atmospheric world Annable is drawing us into with each new release. This one really fleshes out Scoggins in particular, but it also makes a lot of smart callbacks to the original and brings in familiar people, places, and puzzles in smart, satisfying ways. It’s like you had an effect or something!

I almost want to patent this as the “Telltale Technical Paragraph” since so many people are worried about each new release, but just as a note here, Puzzle Agent 2 runs poorly for the first hour or so on the iPad. At this point in the development cycle, and as non-intensive as Puzzle Agent 2’s visual design is and animations are, there’s no excuse for this. It brings down the experience. Also, a side-note here, we’ve seen additional reports that the game is garbage on 3GS devices and the like, too, and doesn’t even run on devices older than that, so be careful.

Anyway, Puzzle Agent 2 is a competent continuation of the franchise featuring solid wit, devilish puzzles, and one of the most inventive adventure game characters: Scoggins. If you’re a fan of Puzzle Agent, there’s no need to skip this. If you’re a newcomer, you’ll find it, at first, a bit uninviting, but quickly you’ll be drug into its odd little world.