In celebration of the release of Duke Nukem Forever, Remedy Entertainment has once again slashed the cost of its over-the-top racing title Death Rally [$.99]. For a limited time, it’s just $.99 instead of its usual $2.99. Also, it’s been updated with Nukem-themed frills to go alongside the iconic character’s appearance. Specifically, a new survival arena called “Duke Match” has been added as well as a fresh Monster Truck.

I’m not sure if we’ve addressed this before, but the reason why Duke is in the title has to do with Remedy’s, 3D Realms’ and Apogee‘s relationship. The trio worked with each other for awhile and Duke wormed his way into the original release of the game. 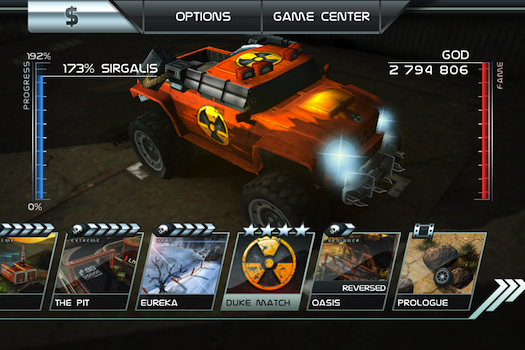 Bug fixes and other tweaks are a big part of this update, too. More boss voices have been added alongside a new radar indicator for boss cars and a new explosive icon. Missiles no longer “make impossible turns,” voice-over timing has been improved, and several other key fixes have been made. Hit up the official blog for the full notes if you’re interested.

This is an odd update for a couple of reasons, foremost being that Duke Nukem Forever has been met with negative critical reception across the board. It might have taken a good chunk of our lifetimes to make it to market, but it still needed more time in the oven. This game, on the other hand, is actually fun. Check it out — Duke or no Duke.