I’m late to the party on this one, but if you have any room in your heart for bullet hell shooters you should take a look at Danmaku Unlimited [$1.99 / Lite] You might know that already, but there’s a good chance you don’t. Maybe you’ve been living under a rock. Maybe you don’t venture beyond Cave’s fantastic stable of shmups. Or maybe you’d like to play these games but you’re intimidated by the difficulty. Whatever your excuse, you should really give this one a shot.

If you’re a bullet hell newbie (like me, I have to admit), here’s how it works. You control a ship flying over a scrolling 2D backdrop. Enemy ships fly at you and shoot waves of bullets in your direction. Bosses are especially efficient at filling the screen with projectiles, often leaving you to work out patterns in their fire to slip though. That’s the “hell" part of the genre, and it’s the part that usually drives away casual players. Luckily, Danmaku Unlimited offers up a kindness to those of us who can’t memorize patterns and react instantly: a generously simple Easy mode. It’s not dead simple, but it’s far less hellish. 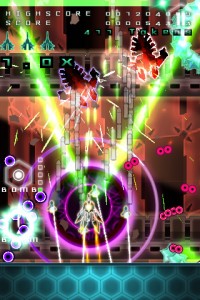 Normal and Hard pose plenty of challenge for hardcore players, however. Later bosses are intense enough that the game can get laggy on third generation devices (it isn’t compatible with earlier generations). And to play your best, you need to be willing to take some risks. The hit box of your ship, the part that will cause you to lose a life if you get hit, is tiny – a glowing gem in its heart. Get hit anywhere else and you earn grazing bonuses, which increase your multiplier and eventually trigger a Danmaku Trance. While trancing, you can easily destroy everything in your path.

Beyond that feature, you’ll find a fairly traditional bullet hell shooter. But Danmaku Unlimited stands out not just on mechanics, but on looks. This game is gorgeous. The bullets themselves are crisp and colorful, and even the ships and backgrounds look great. The enemies and bosses get a little repetitive, but they look fantastic no matter how many times you run into them. The controls also work quite well. You slide your finger around the screen to move your ship. The small hit-box makes the game a little more forgiving than other entries in the genre, and the touch-sensitivity is adjustable.

As with other bullet hell games, making it through the game’s 5 stages is only the beginning. The real goal of Danmaku Unlimited is to earn higher and higher scores, and to do that you need to play as perfectly as possible. Your ship is supplied with bombs that will automatically trigger when you’re hit. It’ll save you a life, but it also resets your multiplier. Worse, if you run out of bombs and get hit again, your ship will be destroyed. This not only resets your multiplier, it also resets the tokens you earn. Die enough times to need a continue, and your score will get reset too. If you just want to limp past the finish line, this is a fine way to play, but if you want to compete on the Game Center leaderboards, you’re going to need to conserve your bombs and lives, and avoid needing to continue.

The tokens I mentioned can be used to upgrade your ship, increasing your firepower and adding extra bombs, lives and continues. You can also choose from three different firing spreads for your ship each time you start a game. Once you complete Arcade mode, you unlock that difficulty level’s Boss Rush and Free Play mode, adding a little longevity to an already substantial game.

Danmaku Unlimited is a gorgeous 2D shooter that offers up challenging stages and lots of competition. I can’t wait to see what comes next from the developer, who’s hinted at an upcoming shmup project in our forums.