There are plenty of popular car racing games in the AppStore; Real Racing 2 [$6.99/HD], Death Rally [99¢] and Reckless Racing [99¢/Lite/HD] spring to mind, to name a few. However, moto-racing is less frequently represented, so it’s nice to find a new game about Italian motorcycles which looks pretty sweet. Ducati Challenge [$3.99/HD] from Ducati and Digital Tales opens with a montage of Ducati motorcycles in action, complete with pumping music. If you’re a motorcycle, Ducati or racing game enthusiast, check this out.

The game features three modes: Quick Challenge, Championship and Multiplayer. Quick Challenge allows you to practice before a race, to familiarize yourself with the bike and track. You choose the difficulty level and number of laps. Championship Modes include easy (4 races), medium (6 races) and hard (12 races), which must each be beaten in turn as they’re locked initially. Each Championship begins with qualifying practice laps which determine who scores pole position, followed by the race itself. Multiplayer mode lets up to four petrol-heads race via a local wi-fi connection and works with a combination of iPhone and iPad devices. 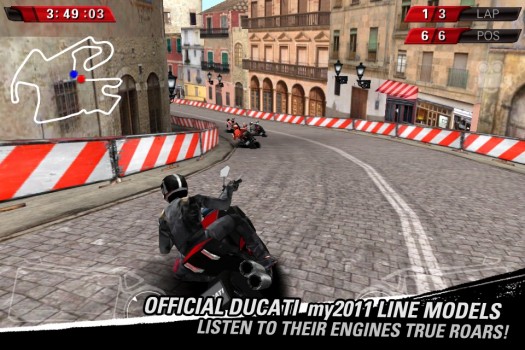 Let’s look at the bikes and tracks. You start with a 1100 Monster EVO , but can unlock other Ducati bikes by winning races, including a Hypermotard, Diavel, Multistrada, Streetfighter and Superbike model, which all feature in Ducati’s actual product range for 2011. The roaring engine of each model was recorded live, giving each bike a unique and “true" engine sound. You can hear the gearbox changes. This all sounds better if you wear headphones, plus you’ll also hear which side the opponents are approaching from. While you can unlock these bikes, there’s no way to boost their attributes such as vehicle speed, acceleration, handling or damage, which makes sense given that you’re actually racing real-world bikes. There are six tracks provided, including mountains, village, urban and desert settings. Each track can be raced backwards too, effectively making 12 tracks in total.

The retina graphics are excellent. During a race, you can see far into the distance, which creates a realistic landscape, but attention is also paid to little details. There’s billboards, spectators, vehicles parked off-track, fences, stadiums, an ambulance and buildings and that’s just the first track. When you mess up a corner (and you will) your wheel stains green from the grass. There are three settings for graphics: Low (no effects), Medium (anti-aliasing ie: smoothing) and High (adds motion blur). One minor issue with the graphics is that the wheel and bike shadow are indistinct, forming a black area beneath the bike. Camera angles can be set to first-person, behind-the-rider or rear-view perspective. 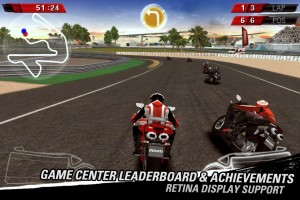 The controls include a combination of touch and tilt. Unobtrusive buttons are provided for brake and throttle and holding these down causes stronger braking or acceleration. Tilting the device leans the rider left or right. If you don’t like tilt controls, smile, because touch controls are planned for integration in version 1.2, but it’s not clear yet if this will be via buttons, screen touches or sliders. Two extra tilting moves are available: Accelerating and tilting forwards pulls a wheelie (you big show off!), while braking and tilting backward performs a “stoppie". The wheelies are an obvious highlight as they’re easy to control, but you can still steer and it feels superb to pass between multiple opponents on one wheel. Yeah baby! Eat that.

How do the bikes handle? That’s up to you. The amount of brake assistance provided is configurable (on, off or warning), so you can choose an arcade or simulation game style, to suit your taste. The hardest challenge is definitely the corners. Taking them at full throttle simply does not work, so it pays to brake early and accelerate when exiting the bend. Warning indicators appear on screen prior to each corner, which are color-coded to show the difficulty of the turn. You can ram other riders, of course, but that typically causes you to crash. And if you don’t like the quality in-game music, simply play your own iPod tracks.

While this game has plenty of positives, there’s a couple of issues. The menu keys are small and occassionally unresponsive, requiring multiple taps to register. The player profile name couldn’t fit my full Game Centre name, so it was truncated by default. The circuits are quite long, which is fine when you’re racing, but if you’re half a lap behind – *ahem* – it can be a long and lonely circuit. A short and simple circuit would have been a better initial training ground. And some players have commented that the “feeling of speed" could be improved; although a motion blur update has recently been added. And lastly, bumping and grinding against other bikes currently feels and sounds clunky and repetitive.

Ducati Challenge proves that two-wheeled gameplay can be as good as the four-wheeled variety and the developers are still making improvements. This game is an easy recommendation for moto-racing fans, who will strive to unlock the latest official Ducati models and circuits while climbing the leader-boards. Personally, i’m playing to unlock the rest of the backgrounds, which look so good in the (above) trailer and along the way i’ll probably pull some massive wheelies.