Pavel Tsarev’s iDaTank [$1.99 / Lite] was released a few weeks ago but had some troubles, namely some crashing issues and a lack of a save function when the home button was pushed — thankfully an update thrust out last week fixes those problems, meaning all of us can sit and enjoy the unique experience without having to worry about saving issues.

Nailing down what it is that makes iDaTank enjoyable is difficult. At its core, it’s a resource-hoarding exploration game where you’re controlling a small tank as it moves around a small, three dimensional planet collecting resources and killing enemies. Somehow it also manages to feel a bit like a rogue-like, where permadeath can end your game quickly (although you can purchase more lives through the in-game economy), weapon upgrades are slowly seeded out and an RPG system lays underneath the hood to increase the tanks properties. 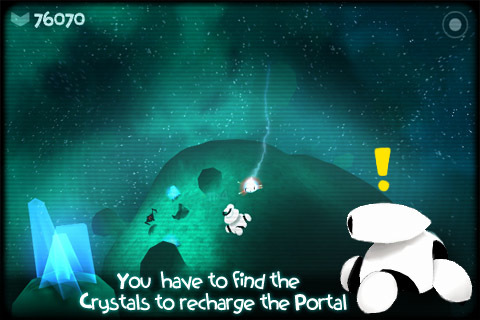 It doesn’t fit into an easily definable genre-box, which is what makes it all the more appealing. The game play doesn’t stretch much further than what you’ll get from the outset — you drive around, stripping planets of resources and killing enemies, but you still feel like you have to see what’s at the end.

You control the tanks movement by sliding your finger in the direction you want to go — there is no virtual joystick, but it feels similar, perhaps even better than one. The firing is done automatically, so even though it might look like a duel stick shooter, it’s not. Somehow, the constant upgrades keep it interesting and as the game progresses, you can actually feel it change underneath your fingers. You get more control over your tank, more speed, weapons, storage — the progression feels spot on, even though you’ll have to grind a bit to get through later levels. 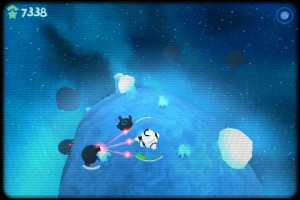 There are a total of 26 different levels, each subdivided into different subsections based on planet type. Each planet has its own alien life, is shaped differently and a few even have bosses, which if you run into unprepared, will absolutely slaughter you. That’s made all the more difficult by the fact you can’t back out and leave a planet if you find it too tough, which means you’ll need to grind the early levels before you jump into some of the later ones, providing a serious challenge even if you’re fully prepared. The goal of each planet is to capture a certain amount of resources, sometimes this means running over and delivering some blue crystals, other times you’ll need to kill enemies or blow up giant egg things. You’ll often need to make several trips from the resources to the delivery platform before you’re finished with the level.

Picking which upgrades to use on your tank and your weapons is integral to your success in each mission. Weapons are handled by the same in-game economy as the lives, so you have to choose between the two. Tank upgrades are dispersed out when you reach a new level by gaining XP from killing aliens. There’s also the whole permadeath thing that might turn some people off — when you’re out of lives, you have to start over at the very beginning of the game.

iDaTank is built in Unity and looks the part. The 3D graphics are simple, but they work with the overall atmosphere of the game, which is to say it’s a minimal, but well-planned and well-executed idea. That said, the enemy animation is top-notch and the tank looks great as well — like something pulled straight out of Jonathan Ive’s brain if Apple suddenly decided to start making space-tanks. The interface continues the minimalist trend, almost to a fault as it takes a couple of taps to figure out what a button does instead of just one, but the uncluttered look works well with the rest of the game. It’s a universal build, but it looks a little better on the iPhone’s smaller screen then it does on iPad. However, the controls are a little smoother on iPad, so pick your fancy there if you have a choice.

Despite the ambiguous name, iDaTank is a surprisingly in-depth adventure game with a thin, but adequate layer of RPG elements added on top to keep you coming back for more. Like the best rogue-likes, it works like crack in that you’ll manage to inch further and further into space through each playthrough before suddenly realizing it’s three in the morning.