Defiant and Chillingo’s Rocket Bunnies [$0.99 / HD] tells us of a future where bunnies have spread throughout the universe, and one rabbit, armed with only a rocket, must fight the forces of oppression to bring food to the hungry masses on each planet and asteroid. Or something like that, anyhow. Story isn’t really a big thing in this game.

What we get instead is plenty of gravity-based planet hopping. Each level is filled with planets and asteroids, as well as obstacles—orbiting mines, rotating electrical fields, homing robotic spiders and the like. You, as the titular rocket bunny, orbit around a planet until you tap another one nearby. This launches you toward that planet as soon as you’re lined up with it, and with careful timing you won’t succumb to the various enemies and obstacles in your path—you might even get them to blow each other up. Hungry bunnies are spread between the planets, and your goal is to get to each of them alive. 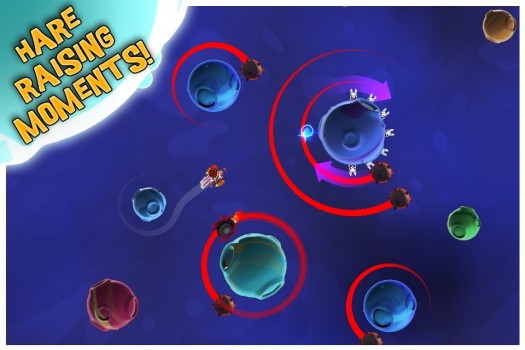 Gravity-based physics games are already well-represented on the App Store, but Rocket Bunnies does things a little differently. You might start out treating it like a puzzle game, plotting each move carefully, but that isn’t going to work for long. As you make your way through the game’s 60 levels, you’ll quickly learn that hesitation is death. Sit on a planet too long and a spider will come to destroy you. Fling yourself away from an asteroid at anything but the right moment and you’ll smack headfirst into a web or a mine. There are no second chances. Mess up once and you’ll be starting the level over again. 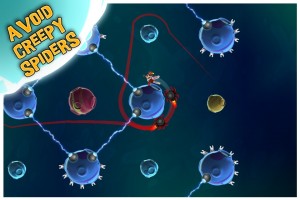 The fear of failure isn’t the only thing that will keep you moving. In order to unlock all of Rocket Bunnies’ levels, you need to earn higher and higher totals of stars. Each level has three stars to earn, but you don’t collect them through clever platforming or puzzle solving, you earn them with speed. Muddling through at a steady pace will generally give you only one star, and you won’t be able to unlock all the levels with performance like that. I’d like to see completion time leaderboards in a future update, since so much of the game revolves around shaving seconds of your time.

When I wasn’t rocketing through each level at maximum speed, I didn’t find Rocket Bunnies all that much fun. Avoiding all the obstacles while feeding the bunnies is challenging, but sort of bland. The game got a lot more interesting once I realized the stakes behind my level completion times. I needed to both react quickly and time my jumps carefully to get boosts (a reward for perfect timing) and to avoid dying.

While you’re working on earning those three-star completion times, you can gather the 32 Crystal/Game Center achievements. Most of them require creative space acrobatics, with a couple that require grinding and completionism. Intrepid explorers will also be rewarded with a collection of hats that are hidden in a few of the levels, allowing you to dress your bunny in a sombrero or a trucker’s cap if you’re so inclined.

Despite all of that, Rocket Bunnies never completely grabbed me. It’s a solid, even game that’s good across the board that is never quite great. If you’re looking for a new physics platformer, you certainly won’t go wrong grabbing this one. It’s not quite a universe of entertainment, but it’s a galaxy or two for sure.