Back to the Future Episode 4 [$6.99] is available on the App Store. At this point, these write-ups are turning into reports as opposed to reviews. I’m OK with that. The first serial laid the foundation for all the future episodes mechanically and functionally. A review would be weird when there’s nothing evaluative to say without regurgitating previous musings.

In other words, if you’re new to Back to the Future read our review of the first episode.

Episode 4 kicks off right after the events of its predecessor. In the course of the game, however, you will travel back to 1931, which means there’s a… pseudo-new environment to explore and interact with. The beginning of this specific episode in contrast with others does deal heavily with the dialogue wheel, so if you like the characters, this should be in your wheelhouse. If not… well, there’s a lot of find, manipulate, and “use” convention. 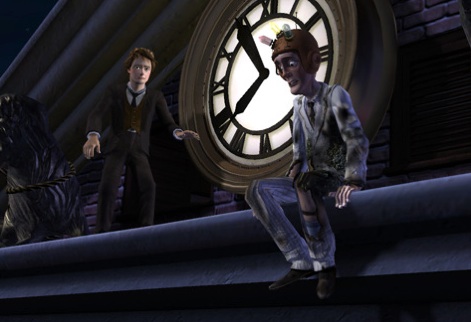 I have a couple of thoughts coming out of Episode 4. Wouldn’t it be great if there were decisions you could make that branched out the plot in interesting ways? Wouldn’t it also be cool if these ‘choices’ carried that impact from episode to episode? Telltale never does this, but I think I’d be more invested in the series if it revolved around my actions.

Also, I’m tiring of this engine. Native app or not, these games run much, much slower than their PC and Macintosh counterparts. I understand the graphical sacrifice, but why doesn’t the lack of textures, lighting and other effects mean we get a snappier game? I think there’s some good work that can be done in the future with other series.

The next episode in the series will be the last. I don’t have a hard date for its release, but I would imagine that it hits next month. I’ll keep you in the loop.