Ever felt like stomping your way all over Paris or San Francisco? Zilla has you covered in Demolition Dash [$0.99 / HD]. Smash and run action will take you all around the world, to eight major cities where you’ll rip down trees, kick pigeons, blow up billboards and destroy the military forces that try to stop you.

Zilla is our hero, a rather small monster with a great big roar. Following the model of other run ‘n guns, Zilla runs full-speed ahead in one direction while you control jumps with one hand and roars with the other. Roaring is Zilla’s only attack, but it’s super effective, destroying everything in range. Demolition Dash isn’t an endless runner, though. Zilla climbs out of the water, runs, jumps and smashes through each of the game’s 24 stages, and dives back in at the end—if you survive that long.

Little Zilla is up against an impressive force. Police squads, vans, helicopters and tanks all get in the way, and the only way past is to roar them to pieces. Run into one of them or miss a jump and a chunk of Zilla’s tail gets knocked off. Lose all three tail pieces and the next hit is game over. 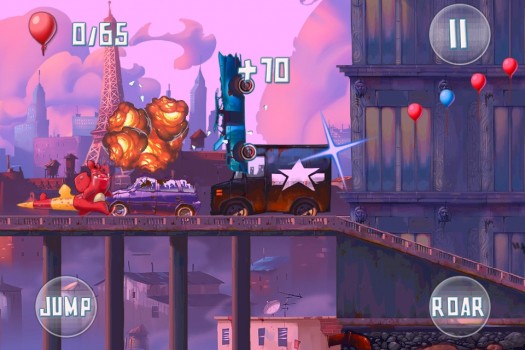 On top of making it through each stage alive, there are additional challenges to master. Each stage has its own secondary goal, so sometimes you’ll need to hunt down 30 helicopters, and other times you’ll be gunning for a high score. There are also Game Center leaderboards for each city and 11 achievements to earn. You can improve your score by earning demolition combos and by making smart use of the game’s three power-ups: chili peppers that give you mega roar, wings that let Super Zilla fly, and stars that bring out the GodZilla in our little dino friend.

Other than the adorable Zilla, it’s the artistry of the game’s eight cities that really makes Demolition Dash shine. Each city gets custom buildings and trees, a background featuring a major landmark, and its own arrangement of the game’s theme. Clearly a lot of love was put into the music, and it paid off—I just wish as much thought had been put into the rest of the auditory experience. 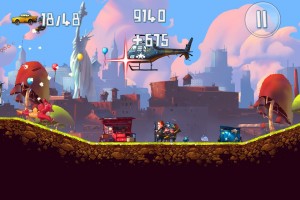 I turned off the game’s sound effects during the second or third city. With Zilla crashing around and roaring every few moments, police squads shouting and sirens blaring, the sound turned into a mess. The audio quality is great, but I was sick of hearing it. Thankfully you can toggle sound effects and music separately.

I also found myself wishing for a quick level reset option. Things get kind of crazy in later levels, and it sucks to lose lives early on. The only way to restart and get back into the action is to quit back to the menu and wait through rather lengthy loading screens. My 3GS struggled a bit with some of the busier levels, making this a bigger problem when I would die early to frame rate drops. A freshly reset phone performed better, though not perfectly, and the newer devices play Demolition Dash smooth as silk. It also looks gorgeous on Retina screens.

Demolition Dash should be getting an update next month to add Endless Run mode, which seems like it will be a perfect fit. Open Feint support and stat tracking are also planned. Weirdly, the game currently gives players a code that can be redeemed on the developer’s Facebook page for a discount on t-shirts or web storage, if you’re looking for value-added features.

Smashing up cities and making mayhem with Zilla is great fun. Our forum users are enjoying it so far, too. So if you’re looking for a little destruction in your life, Demolition Dash is a game you’ll want to play.