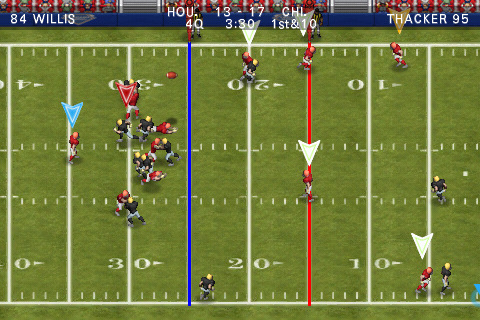 Arcades just aren’t what they used to be (with a notable exception or two, of course). But, back in the day, they were wonderful places — the glowing cloud of phosphorescence, that lovely din of beeps and boops from every direction, and rows and rows of stand up cabinets of many shapes and sizes. Of all the cabinets I recall encountering in my youth, one of the most striking was that of Tecmo Bowl, an American football game released in 1987 that was easily the most visually impressive arcade take on the sport of its day. It was a 46-inch, double-wide cabinet that featured two side-by-side monitors sitting back in a dark sort of monitor cavern. The game was played on a side-to-side “widescreen" rendering of a football field across both screens. 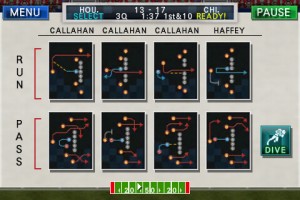 Those recalling this well loved game will be happy to hear that Tecmo Koei Games has just released an enhanced iPhone version of the game, called Tecmo Bowl Throwback [App Store].

Those fondly familiar with this classic likely recall the highly popular NES port, which was responsible for most of the game’s popularity, given the relative scarcity of the wide cabinet in arcades. Tecmo Bowl has, since, come to the Game Boy, the Wii Virtual Console and, last year, the PS3 and Xbox 360 in the form of Tecmo Bowl Throwback. This iPhone release is actually a port of last year’s console remake. 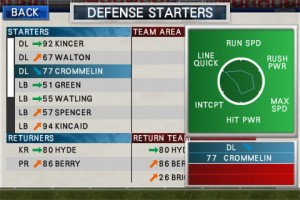 Like all versions of the title, gameplay in Tecmo Bowl Throwback consists of basically picking teams, starting off a game, and choosing plays from a menu that can be customized to some degree. In the arcade and elsewhere this is done with buttons and sticks, but on the iPhone a touch interface that works well has been put in place. It’s the same basic drill, however.

Once a play is in motion, you can choose where a player runs or who to pass to with a screen tap. The active defensive player can be chosen with a tap and the act of tackling a player or breaking out of a scuffle is also done with a tap. This approach versus an onscreen D-pad that might’ve tried to emulate console play was a wise design decision, I feel.

Now, sadly, I am generally not a fan of sports games. I did play the arcade version a few times with friends long ago, and recall it being a good time. Tecmo Bowl, when it was released, was praised for its easy appeal to typical gamers. Spending time with the iPhone version, I can understand where that sentiment was coming from; it’s a very approachable title. 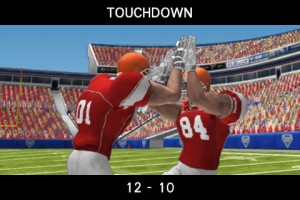 The arcade graphics were impressive for their day, while the NES version’s were less so. When the title came to the PS3 and Xbox 360 it got a major overhaul featuring a sort of angled perspective 3D playfield. The iPhone version sits somewhere between the original arcade version and last year’s console release on the visual front. It’s pretty much 2D gameplay with shadowed “3D" players. It looks nice enough, though somewhat retro — a situation magnified by the game’s apparent lack of native Retina display support.

Tecmo Bowl Throwback offers a Quick Play mode to get you going in a flash, and also a Season Play mode that offers more depth, variety (30 teams in all) and overall team development. There is an impressive degree of player and team stats available through the menus, with certain customizations available along the way.

Tecmo Bowl Throwback is a solid representation of the original game that stands as a well done, albeit somewhat abbreviated (no online play, for example), version of the recent console release. Those who enjoyed the earlier versions should have a good time with the iPhone release, but I fear that the nearly 25 years of video game evolution that’s taken place since Tecmo Bowl hit the arcades will limit the game’s appeal to gamers that have no history with the title.

Tecmo Bowl Throwback requires an iPhone 3GS or 3G iPod touch or better. The iPad’s full display is not natively supported at this time.