Say, have you heard about this whole “planking” business? I’ve just become aware of it in the past few weeks myself, but planking is the latest ridiculous thing that is sweeping the internet. It involves lying face down on an object, stiff as a board with your arms at your sides, like a plank, and then being photographed in the act. The stranger the location you perform your plank, the better. For example here is some folks planking in a tree, or some Apple employees planking inside of an Apple Retail store. But be careful, you don’t want to end up like the man who fell to his death planking on a seventh story balcony railing.

So yeah, planking. Maybe I’m just getting old, but I totally don’t see the appeal. Thousands of other people do see the appeal, however, and if you yourself are a planker you’ll soon be able to get your plank on while on the go in the upcoming game Plank’d. Not being a fan of the whole planking phenomenon, I wasn’t immediately interested in having a game version. But after actually trying the game, I’ve found that it’s completely absurd and actually a ton of fun. 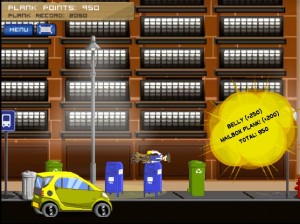 You can try out the game for yourself on the Plank’d website for free, just make sure you have the Unity browser plug-in installed. Basically, you get to control one of three characters using an awkward physics system as you try to lie flat on practically any object you can see. This includes cars, street signs, mail boxes, old ladies, and more. You earn points based on how well you hold your plank, and can string multiple planks together for combos. It’s the sort of thing that’s so strange that I can’t help but like it.

Plank’d is only available as a web version currently, but an iOS version is coming “very soon” according to developer N3V Games. There’s a thread in our forums for discussing Plank’d, and we’ll keep an eye out for this one to hit the App Store soon.