It’s pretty clear the first time you load up Delusion Studio’s House of Mice [99¢] that one of the developers is a big fan of Hanna-Barbera cartoons. It’s not just because you’re playing as a group of mice hell-bent on destroying a cat, it’s also because the game features some of the slickest animation you’ll find in a puzzle game.

Unless you’ve never booted up the App Store in your entire life, you’re going to recognize House of Mice right away. It’s a one-screen puzzle game that requires you to get from one point to another while grabbing onto three tasty pieces of cheese. The game certainly looks the part of Cut the Rope or its countless iterations, but the gameplay takes a different, albeit familiar approach.

House of Mice is essentially billiards with mice that turn into bombs. To complete a stage, you need to flick one of three mice through a set of obstacles and into a cat that bears a striking resemblance to the Cheshire Cat from Alice in Wonderland. Along the way you’ll want to pick up pieces of cheese to improve your score, but if you’re struggling with a particular level, killing the cat will suffice. 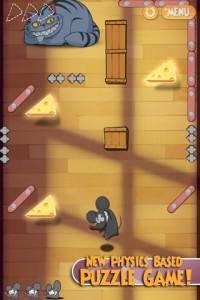 The game currently features 80 levels spread across four different areas and as you progress through them, new obstacles are introduced. Boxes will block your path that require one or two mice to destroy, pipes will transfer you over to another part of the level and fans and magnets will alter your pathway. You’ll oftentimes have to bounce a mouse off a wall and into a box to sacrifice it so another can pass through to kill the cat. The quicker you do so, the higher your score.

As of right now, you’ll only be competing against yourself for those high scores, but as noted in the forums, Game Center and Facebook integration is coming in the next update (as well as a Lite version). That’s lgoing to help offer more in the way of replayability for anyone obsessed with high scores, as it’s not just about grabbing the cheese and exploding the cat, but how quickly you can do it.

While the gameplay is far more original than it looks on first glance, the real appeal is its visual style. Not only is the premise derived from classic Tom and Jerry cartoons, but the entire look of the game is. It’s a beauty to behold and the visuals look like the hand-drawn animation cells of ’40s classics. There aren’t a whole lot of moving parts in the game, but when there are, you’ll be wishing you were playing on an iPad just to get a closer look at them.

If you needed more proof of the games visual importance, you can click through the “Extras" screen to watch the opening video, the credits and the ending video again. They’re short, but they’re well worth watching for their style alone. The fact they’re included at all is an indication of their merit.

It might sound a bit like this is a case of style over substance, but while House of Mice’s wrapper is certainly its most delicious part, the gameplay inside still gets by as an enjoyable, easy to grasp concept that offers enough of a challenge to keep it interesting. If you enjoy puzzles with a heavy emphasis on light-geometry, you’ll love what House of Mice has to offer, but even if you don’t end up getting into the gameplay, it’s hard to deny how great it looks.