At first glance, Alex Blaj’s Firefly Hero [99¢] doesn’t look like much, but what it’s lacking in graphic variety it makes up for in solid mechanics that might look similar to other iOS puzzle games, but are wholly and completely its own. It’s filled with intelligent puzzle design, charm and oftentimes devious screens that take serious thinking to get past.

The basics are pretty simple, you’re tasked with making a firefly capture stars. But fireflies aren’t the smartest of creatures, in this case, it will make a beeline to whichever light is on, regardless of what obstacle is in the way. “Stupid firefly!" you’ll say, but then you’ll realize you can get quite a bit of control by toggling between different lights on the screen. 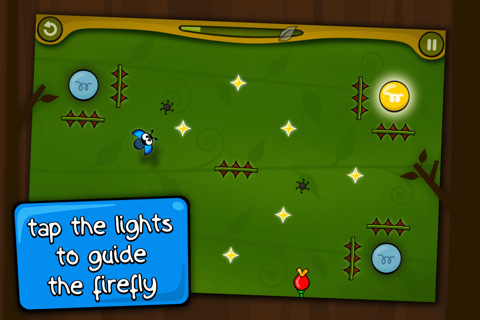 That’ll all seem well and good for the first ten or so levels, but when Firefly Hero decides to ramp up the difficulty, it really busts your noodle in half and makes you question how something so simple looking could possible be so hard.

That’s not meant as a negative. Firefly Hero’s difficulty is a welcome challenge. The level design is amazingly well thought out, and teeters on the line between “How am I possibly going to do this?" and “Aha!" While a magnet-puzzler isn’t anything particularly new, the level of control you feel like you have over the firefly without ever actually having direct control is what makes this work as well as it does. It’s a good thing, because some of the later levels require acutely timed taps. 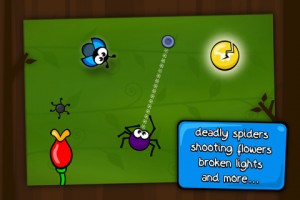 You’ll run into your standard fair of iOS game obstacles across your adventures. Spikes, spiders, fans and death-dealing flowers all make an appearance. The lights themselves will also take on different traits, including shattering after one use or by turning off and becoming unavailable in timed patterns. When all of these things are going on at once, things start to get real interesting and incredibly complicated.

Firefly Hero comes packed with 60 levels from the start and you can unlock 15 additional levels if you can “gold leaf" the initial ones. You’ll do this by comboing stars together quickly. It’s not easy, but a dedicated player can get through it.

The only real complaint I can muster up against Firefly Hero is the lack of diversity in the backgrounds. While the gameplay shifts and changes throughout the levels, the green backing screen is static throughout. It’s not a big deal by any stretch of the word and chances are you probably won’t notice it as you’ll be too busy avoiding spike shooting flowers and cursing at one-use lights. It’s pretty clear the focus was on the puzzles, not the polish. The only real problem you might run into is a poorly placed reset button that you’ll accidently tap when aiming for a light, but for the most part the lights are kept away from that section of the screen. 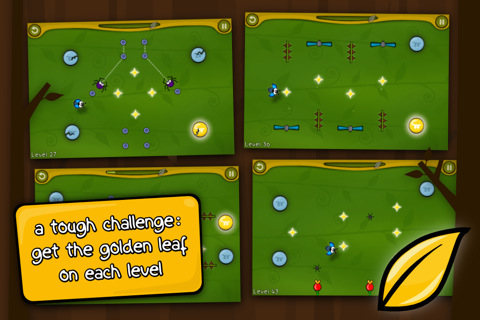 Like any good game, Firefly Hero’s strength lies in its level-design and its pacing. The difficulty certainly ramps up quickly, but at no point does a screen feel impossible to pass. You might need to take a break here and there to step away from a particularly tricky puzzle, but for the most part you’ll breeze through it with a nice balance of deaths and accomplishments. This is clearly a bit of a basement project, so don’t expect all the bells and whistles of a major release — no Game Center or leaderboards or the like — but you’ll get an experience that’s well worth the cost of entry.