Developer FuzzyCube Software has just released their new iPad title iQuarterback 2 [Free] for free into the App Store. iQuarterback 2 is something of an arcade-style mini-game that lets you toss the ol’ pigskin at various types of targets using an intuitive touch screen interface.

There are two modes in iQuarterback 2. The first is called Shoot Out, and has you throwing at targets that move laterally across the field at different speeds. What’s especially fun about this mode is that you must lead your passes so that they end up hitting the targets in motion. This can be pretty tricky due to the different speeds the targets travel, but incredibly satisfying when you time a throw just right to nail one. 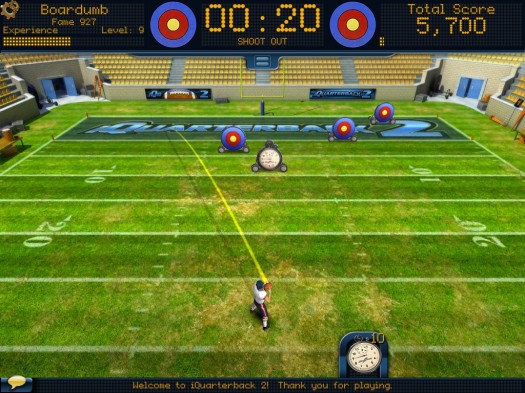 The second mode is simply titled Accuracy, and has you aiming for a series of stationary targets that pop up at various spots in the field. This mode is considerably easier just to hit the targets since they don’t move, but you are rewarded for quickly getting your passes launched as you’re then able to hit more targets in the allotted time. There are special targets in both modes that once hit will allow you things like extra round time, a huge ball that makes hitting targets easier, or the ability to throw multiple balls at once.

Competing in either mode will earn you fame and experience for your character. As your character levels up, you’ll unlock additional items to purchase with your collected fame, like special ball types, new helmets, and different field environments. If you aren’t the patient type, there is also the option to purchase packs of fame as IAP to speed up the whole process, though this is entirely optional. Another nice addition to the overall package is Game Center integration with achievements and leaderboards for each mode. 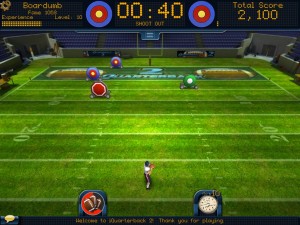 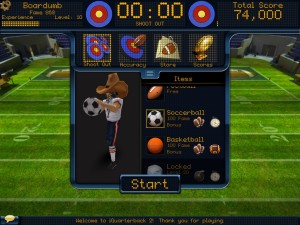 Also, it’s free to download the full game of iQuarterback 2 that is ad-supported with banners running along the bottom of the screen. You can disable these ads with an IAP of $2.99, but I’ve found that they really don’t interfere with the game at all.

iQuarterback 2 is definitely a lot of fun. The gameplay is simplistic, but the upgrading aspect is a real hook, and the crazy items you can unlock along the way are great motivation to keep playing. Plus, it’s free, so there’s really no risk to give it a try. Players in our forums have been liking it as well, so for some fun arcade-style gameplay give iQuarterback 2 a look.