When I first saw the trailer for Simogo’s Bumpy Road [$2.99], I immediately knew it was something that I wanted to play. The graphics, music, and unique controls appealed to me on so many levels. I was given an early version of the game for our hands-on preview, and despite being unfinished and limited to just one mode, I absolutely loved it. Really, though, it just made me even more eager for the final version to hit the App Store. That day has finally come, as Bumpy Road is now available, and it’s easily one of the most beautiful and fun games I’ve had the pleasure of experiencing.

The biggest standout in Bumpy Road is its innovative control mechanic. A car carrying a cute married couple drives automatically to the right, but you don’t actually control the car itself. Instead, touching anywhere on the screen raises the elevation of the ground and creates a bump in the road. Using this, you can create a sort of wave to push the car back and forth or quickly tap under it to pop it into the air. This mechanic is dead simple to understand, but definitely takes some practice for it to click. Once it does, however, you’ll be bouncing the little car all over the screen like an old pro, and it truly feels great. 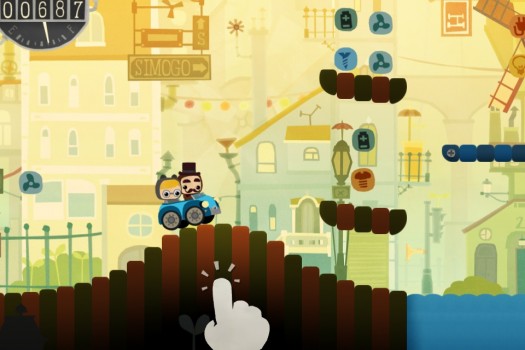 At its core, Bumpy Road is a high scoring game that contains two different modes to play. The first, Evergreen Ride, is an endless trek along a randomly generated set of track designs. You try to make it as far as possible without running out of fuel or falling into a watery pit. Along you path, various types of gizmos are lying around waiting to be collected. Grabbing these will continuously fill your fuel gauge, and if you fill the gauge completely you’ll trigger a bonus sequence that speeds up your car and removes any pits, allowing you to concentrate on picking up as many gizmos as you can before the sequence ends.

The second mode is Sunday Trip, and gives you another randomly generated level to drive in but one that has a finish line. The goal is to get to the finish line as quickly as possible. There aren’t any water pits to worry about here, and collecting boost or clock items will improve your time at the end. There are gizmos to collect in this mode too, but no fuel gauge, and they simply go towards improving your time at the end as well. Both Evergreen Ride and Sunday Trip have their own Game Center leaderboards to compete on and a number of achievements to earn. 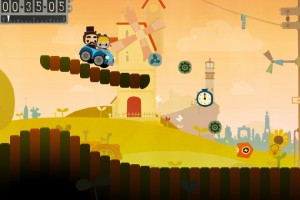 While Bumpy Road is indeed a solid high scoring game, it’s the peripheral elements that transcend it from being merely a well-made video game to an unforgettable experience. I’m a strong believer that games can have a soul, and I can feel the love in Bumpy Road with every tap of the touch screen. The artwork is undeniably charming, simplistic but elegant and full of life. The music is catchy and inviting, and in a great touch collecting gizmos actually creates sound effects that enhance the soundtrack. Even touching the ground emulates the sounds of rolling across a toy piano, which actually make you feel like you’re part of the game while playing it.

There is also a mild story element to Bumpy Road. As you drive along in Evergreen Ride, you’ll occasionally come across old photographs to collect that each reveal a snippet of the married couple’s life together. You can then view all of the collected photographs in a gallery accessed from the main menu. This gallery takes the form of a dimly lit room where the photographs are projected on a screen in front of a silhouette of the couple nestled closely on the couch in the foreground. This is such a simple feature, and yet, it feels so personal to be experiencing the lives and memories of this couple right along with them that it adds tremendously to the experience.

Taken at face value, Bumpy Road is an excellent high score game. The unique control mechanic offers an organic way to interact with the game, even if it’s a little tricky to get the hang of. The pacing, scoring elements, and randomly generated levels all contribute to a game that’s both enjoyable and highly replayable. But, Bumpy Road is much more than the sum of its parts. The real magic lies in the emotional attachment to the characters and the whimsical sounds and visuals that permeate every inch of the touch screen. There is a chorus of praise for the game in our forums as well, and if you like high scoring games or touching works of art, then you won’t want to miss Bumpy Road.