In 2009, Total NonStop Action (TNA) Wrestling was released. Surprisingly, it was a turn-based strategic wrestling game, with RPG elements, enabling your wrestler to “level-up". That game later disappeared from the App Store, with players in the thread suggesting their license expired. Now, another TNA Wrestling game has been released by Bight Interactiveand Namco Bandai.

TNA Wrestling iMPACT [$4.99] opens with bright lights and an electric guitar soundtrack, which introduces the entertainment spectacle that is modern wrestling. It’s a good introduction, and perfectly sets the scene for just how over the top this kind of wrestling is. 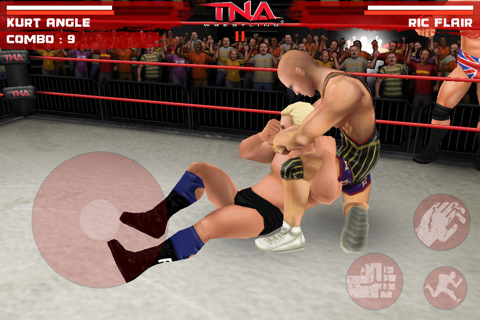 Career and exhibition modes are offered, with three levels of difficulty. Career mode let’s you to play as either your favorite TNA superstar, or a custom made character. There are three career tournaments to play, including TNA heavyweight, X-division and tag-team. Winning matches in career mode improves your wrestler by enhancing their power, toughness, speed and/or charisma. Winning all three tournaments will unlock Hulk Hogan. In Exhibition mode, there’s six match types, each with different win conditions, namely: Standard, Submission, Falls Count Anywhere, No Disqualifications, Cage and Tag-Team. Multi Player is available locally via bluetooth or wifi, or online via Game Center. 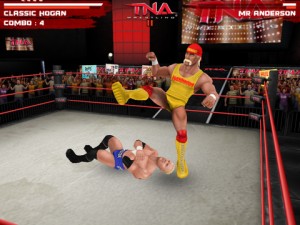 Wrestling fans will be pleased to know there’s a variety of moves available, including: Body Slam, Suplex, DDT, Piledriver, Spinebuster, Facebreaker, and the Backbreaker. Finishing moves include: Blackhole Slam, Border Toss, Running Leg Drop, Olympic Slam and Chaos Theory to name a few. You can also pick-up objects like bats from the crowd, or chairs, as weapons.

High scores and achievements are integrated with Game Center, with over 25 achievements. Extra content, such as outfits and alternative ring themes can be accessed by installing and starting certain other games, to earn the “TNA Stars" necessary to make the purchases.

I’m sure this all sounds amazing if you’re a wrestling fan. Really, TNA Wrestling Impact offers a lot of features; but given the dubious history of wrestling games on the App Store, is this one awesome to play? Sadly, the answer is “not really". It’s okay, not superb. 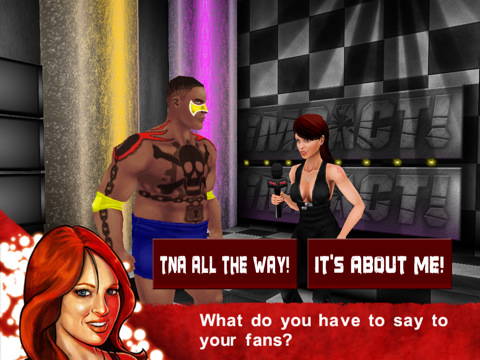 The first disappointment occurs during the introduction, when the characters speak without voice overs. With games like FIFA 11 and Fight Night providing quality commentary and other voice work, it’s disappointing to see the wrestling characters communicate via subtitles, while their animated mouths flap endlessly and the same hand gestures loop over and over. It’s difficult to convey the energy, showmanship and bravado of wrestling via sub-titles.

Once the match begins, the wrestler’s movements feel slow and cumbersome, rather than smooth and exciting. Opponents occasionally fall over without any contact being made. Graphical glitches occur regularly, with the opponents boots disappearing inside your body, body parts being obscured by the ring or one wrestler walking straight through another. Brushing against a barrier outside the ring causes your superstar to collapse. The pumping music at the start disappears during gameplay, leaving the unrealistic sound of the crowd, who appear to be related to each other. At least, the same figures, in the same clothes, appear repeatedly. Interestingly, from some angles the audience are all facing away from the ring.

The game sometimes surprises by busting out a new move, like pummeling the opponent while standing on the ropes and pinning them in the corner. There’s also satisfaction to be had from pulling off moves successfully, especially of the aerial variety, but overall the wrestling gets repetitive quickly. Overall, TNA Wrestling Impact seems to have a lot of potential, but ultimately fails in overall execution, which seems to be par for the course for most wrestling games– Especially in the mobile world.