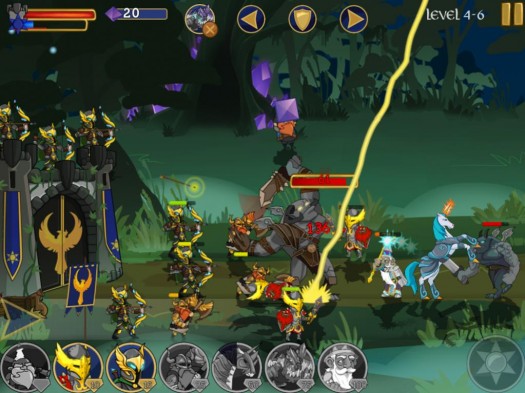 One of the strongest entries in an overcrowded castle defense genre is Liv Games’ Legendary Wars [Free]. We reviewed Legendary Wars back when it launched during Macworld in January, and found it to be highly enjoyable due to the variety of gameplay types, interesting upgradeable abilities, and wonderful artwork. Liv Games didn’t stop there, either, and offered up a substantial update to the game in March that added Retina Display support, Game Center integration, and a number of other enhancements and optimizations.

Legendary Wars is a game that seems like it would lend itself very well to the larger screen of the iPad, and indeed many players in our forums have been enjoying the game a lot just playing on the iPad in 2x pixel doubled mode. There’s no need for that anymore, however, as the iPad native Legendary Wars HD [99¢] is now available. It’s essentially the same exact game content-wise, but the bigger screen allows more of the battlefield to be shown, requiring less scrolling and giving you a better view for planning your strategy.

Legendary Wars HD looks and plays wonderfully with a properly formatted screen and native resolution graphics for the iPad. As a special launch promotion, and as a bonus for current owners of the game who may want to double dip with the iPad version, Legendary Wars HD can be purchased for just 99¢ through the weekend. Plus, if you don’t already have the iPhone/iPod touch version, you can currently pick that up for free this weekend as well. It goes without saying that you should definitely give the regular version a download while free, and if you own an iPad then Legendary Wars HD is an easy recommendation at the launch price of 99¢.