As happy as it makes me to see how far the iOS platform has come in adapting to more traditional gaming tropes, there’s really nothing I love more than coming across a game that utilizes controls and mechanics that feel completely organic to the touch screen. Such is the case of Foodies [99¢], the first iOS game from indie developer Nano Titans and one that I had never even heard of before until it popped up in the App Store just a few hours ago.

Foodies is a story of two squishy, uh, creature… things named Sam and Pam. They are madly in love and Sam proposes marriage to Pam, but there’s a problem. Pam likes a man with some meat on his bones (if these things have bones, that is), and she has given Sam one week to gain some weight before she’ll agree to get married. All that’s left for Sam to do now is eat everything in sight.

The unique control mechanic in Foodies is a big part of what I like so much about the game. Placing two thumbs on the screen will create a line in between them. Sam will drop into a level from the top of the screen and you’ll use this created line to bounce and push him around each level, collecting the various types of food and avoiding hazards. 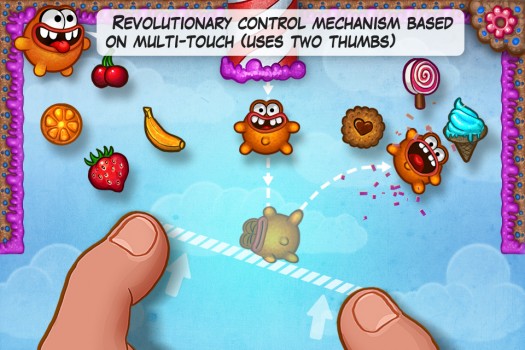 The 80 levels in Foodies are also very creative. Some have you simply collecting all the food on the screen, sometimes with a time limit or only a certain number of bounces to accomplish the task. Other levels require only collecting certain kinds of food (like healthy stuff) while avoiding the rest (like junk food). Oftentimes there are obstacles to deal with too, like buzz saws that will kill you or barriers that must be bashed into several times to get past them.

Foodies also contains the ever-important 3 star rating system for each level, though in this case it’s actually a 3 candles on a cake rating system. You’re scored on the treats that you munch during a level, how long it takes you to complete it, and how many bounces you needed.

This brings me to my one problem with Foodies, and that is that it seems incredibly difficult to earn 3 candles for many of the levels. I’ll feel like I completed one as quickly and efficiently as possible, but when my score is tallied up I’ve barely earned enough for 1 or maybe 2 candles. This isn’t a huge issue and it’s possible there’s some aspect to the scoring that I’m missing, but it’s really the only thing in the game that had me scratching my head.

Check out this extensive video from the developer that gives a taste of the mechanics and many of the level types in Foodies (actual gameplay starts at 1:29):

Besides the tiny scoring quibble, Foodies is an extremely entertaining game. The two-thumbed control scheme is incredibly intuitive to use, and with a bit of practice, you’ll be bouncing Sam around expertly in his quest for increased caloric intake. The 80 included levels will take some time to work through, not to mention trying to earn 3 candles for each, and they get quite challenging and complex in the latter half of the game. I’d love to see some more levels released in future updates, as well as achievements to go along with the already included Game Center leaderboard for total score.

If you’re looking for a new gaming fix that’s different from what’s already out there, plus has charming visuals and plenty of content, then definitely give Foodies a look. I was surprised by just how much I immediately enjoyed the game, and players in our forums seem to be loving it as well.