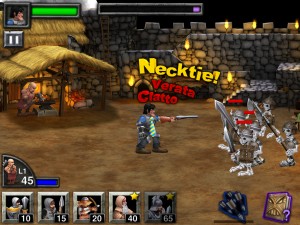 If you haven’t seen Evil Dead, Evil Dead II and Army of Darkness, that’s a problem you really should think about fixing this weekend. Evil Dead is streamable on Netflix, and both Evil Dead II and Army of Darkness are able to be rented (or purchased) on iTunes. The series follows the battle between Ashley “Ash" J. Williams and his encounters with the deadites, the evil offspring risen by the Necronomicon Ex-Mortis. If you like campy horror movies, there really is no finer trilogy.

Anyway, Army of Darkness: Defense takes the popular hero-based castle battle genre and applies a thick coating of Bruce Campbell to it… A combination that could make any genre amazing, but the setting of Army of Darkness lends itself particularly well to the genre. In the game, you play as Ash, and can dispatch all kinds of different forces in various battles with the deadites. The gameplay is fairly standard for a castle battler with a hero you control, with upgrades that you can purchase for Ash himself, the troops you dispatch, as well as your castle. Where Army of Darkness: Defense pulls ahead is in how incredibly well Backflip Studios has implemented all aspects of the movie into the game. I won’t spoil too much, but this game basically redefines fan service.

Army of Darkness: Defense is launching on May 12th for 99¢ on the iPhone and iPod touch along with a HD version for the iPad which will be priced at $2.99. Additionally, each game will have entirely optional in-app purchase where you’ll be able to buy packs of coins to spend on upgrades. Keep in mind, you earn these very same coins by actually playing the game, so unless you’re the kind of person who wants to dump their money into the game to instantly upgrade everything and completely break the difficulty curve… There’s not much reason to buy coins.

Stay tuned for next month, we’ll have a full review to accompany the game’s release.