If you’re an iPhone or iPod touch owner who has been anxiously awaiting Superbrothers: Sword & Sworcery EP since we first saw it at GDC 2010… be mindful of family, friends, and neighbors as a sonic boom is unleashed from your finger from quickly mashing the “download now" button. Joining Sword & Sworcery EP [$4.99] is Sword & Sworcery EP Micro [$2.99], the iPhone-specific version of the game. 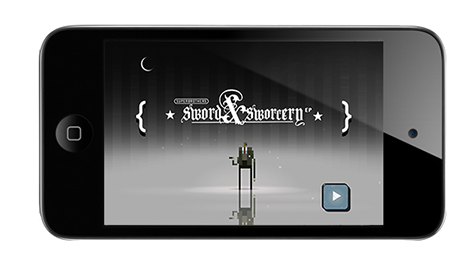 On the smaller screen, the game basically plays as described in our original review of the iPad version. There are things to like about both versions of the game. I like the game on the bigger screen of the iPad, but it looks awesome on the retina display. It’s easier to share the experience with someone else on the iPad, which doesn’t matter much if you’re playing by yourself. What I like much more about the iPhone version is that the rotation of the device to sheath and unsheath your sword feels incredibly natural compared to, as stated in the review, like driving a bus.

If you already own the iPad version, you’ll be happy to hear that it has since been updated to be universal. If the update isn’t showing up for you yet, give it a few. Updates often don’t propagate through the App Store as instantly as new apps appearing.